Midway, Petrel and the Pacific Graveyard 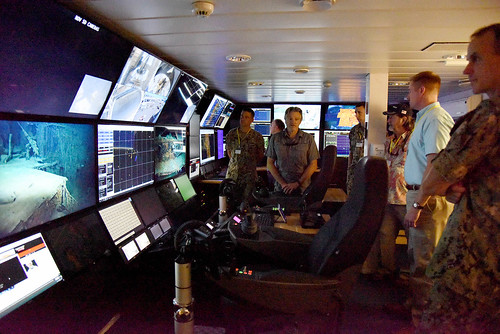 Robert Kraft, director of subsea operations for Vulcan, Inc., center, discusses some of the distinguishing characteristics of a recent discovery during a professional exchange and visit to R/V Petrel by U.S. Pacific Fleet staff members in August. (U.S. Navy/Dave Werner)

PEARL HARBOR, Hawaii - A confluence of Hollywood magic and deep-sea science are rekindling global appreciation for the U.S. Navy’s rich heritage of determination, courageousness and sacrifice. In the midst of the promotion and release of the star-studded movie war movie “Midway,” the research vessel (R/V) Petrel has announced and beamed haunting images of shipwreck discoveries dating back to the most precarious of days in the Pacific in World War II.

The U.S. Navy has supported both of these efforts in hopes of reminding the public – and its own Sailors – of the costs of complacency. With a DOD-approved production support agreement in hand, the U.S. Pacific Fleet staff and the Naval History and Heritage Command (NHHC) offered sustained technical support and coordination to the movie’s production and release. The Navy teams also built on existing relationships with the R/V Petrel to optimize their planned Midway expedition his past fall.

“There are people who know very little about the Navy or its history – and this movie and the images of these gravesites provide a vivid depiction of why our nation needs the U.S. Navy to defend our freedom, and to fight and win at sea. They both serve to reinforce that a strong U.S. Navy ensures a free and open Indo-Pacific,” said Rear Adm. Charlie Brown, the U.S. Navy’s Chief of Information. Prior to this assignment he served as the public affairs office for the U.S. Pacific Fleet.

The movie “Midway,” which opens in theaters Nov. 8, portrays the heroes and battles in the opening months of World War II in the Pacific. The story culminates at the major sea battle in early June 1942 known as the Battle of Midway. The small atoll of Midway, held by the United States, served as an airstrip and provided a key strategic advantage. A flotilla of four Japanese aircraft carriers and their escorts had hoped take control of the airstrip, but three American aircraft carriers met, and sunk, the Japanese aggressors. Of note, the four Japanese carriers — Kaga, Akagi, Sōryū and Hiryū took part in the surprise attack on Pearl Harbor in December 1941. The U.S. aircraft carrier USS Yorktown and the destroyer USS Hammann (DD 412) were sunk in the engagement at Midway as well.

The crew of the 250-foot R/V Petrel has discovered more than 30 sunken warships since 2016, but these past few weeks were astonishing even by their standards. Sailing in the waters off Midway in October, announced the discoveries of the following ships:

- On the 10th, they announced the discovery of the wreck of the escort carrier, USS St. Lo (CVE 63), the first ship reported to have been sunk by a kamikaze. The actual discovery had been made on May 5th off the coast of Samar. The ship was lost some 75 years earlier in October 1944 during action during the Battle of Leyte Gulf.

- On the 18th, they announced they had discovered the wreck of the Japanese aircraft carrier Kaga, off the coast of Midway.

- Two days later, on the 20th, they announced the discovery of the wreck of a second Japanese aircraft carrier from the same battle, the Akagi.

- Less than a week later, on October 26th, their search team announced they had discovered the wreck of the Japanese cruiser Chōkai, on the edge of the Philippine Deep, also discovered earlier in May.

- Finally, and certainly not least, on October 30th they announced they believed they found the wreckage of the USS Johnston (DD 557) at a depth in excess of 20,000 feet. The ship was lost during the Battle off Samar, one of four battles that occurred during the Battle of Leyte Gulf on Oct. 25, 1944.

Previous R/V Petrel finds include the USS Indianapolis, the USS Lexington, the USS Juneau, the USS Helena and the USS Hornet. R/V Petrel’s mission is supported by Vulcan Inc., which oversees and manages a broad compilation of projects and companies that in part represent the late-Paul Allen’s philanthropic interests.

“There are people who know very little about the Navy or its history – and this movie and the images of these gravesites provide a vivid depiction of why our nation needs the U.S. Navy to defend our freedom, and to fight and win at sea.” Rear Adm. Charlie Brown, U.S. Navy Chief of Information

None of these vessels had been seen since their valiant but violent end. Their eerie hulks seem frozen in time, preserved in the cold, dark and deep Pacific Ocean. They all serve as perpetual gravesites on the seabed, and unmistakably stand as a timeless reminders of the toughness, integrity, accountability and initiative of those who put to sea in World War II. Their stories of sacrifice and heroism should remind all like-minded nations that maintaining a free and open Indo-Pacific is a much better than the destabilizing alternative of war.

In preparing for the Midway expedition, Robert Kraft, director of subsea operations for Vulcan, Inc., coordinated closely with the Pacific Fleet to satisfy a parade of government permitting requirements and logistical hurdles. The ship pulled into Honolulu prior to heading to Midway, and the R/V Petrel and Pacific Fleet hosted one another to support the research vessel’s upcoming exploration. More than half a dozen U.S. government agencies have an official stake in the Midway Atoll National Wildlife Refuge and Battle of Midway National Memorial, including the shipwrecks that pepper the seafloor. Through it all, Kraft and his team remained determine to find, and honor, the men who fought and died there.

“During the past year, we have discovered and surveyed many of the lost warships of the Battle of Leyte Gulf and the Battle of Midway. Every shipwreck we find reminds us all of the ultimate sacrifice made by those who served their countries,” said Kraft. “The Battle of Midway was one of the most influential naval engagements and pivotal turning points of the war. It is our honor to have located the Japanese Fleet Carriers Akagi and Kaga.”

One permitting requirement for the non-intrusive research, in accordance with the Sunken Military Craft Act, was authorization from NHHC. Beyond gaining approval, the Petrel embarked Frank Thompson, NHHC’s deputy assistant director for collection management, for the Midway sail. An expert in World War II-class ships, Thompson points out that, unlike land battles, sea battles leave no visible remains on the surface. On board Petrel during the discovery of Kaga, his excitement about the find was quickly tempered when he had “… the realization that I was looking at a war grave for over 800 Japanese sailors and aviators.”

Today, Japan and the United States are the closest of allies, and nowhere more so than between their navies. The lessons of Midway have not been lost on either.

“On the occasion of the discovery of the Kaga, we send our thoughts and prayers to our trusted and valued friends in Japan,” Rear Adm. Brian P. Fort, commander, Naval Forces Japan, said in a statement. “The terrible price of war in the Pacific was felt by all our navies. From that painful lesson, we have become the closest of allies and friends committed to maintaining a free and open Indo-Pacific.”

While the Petrel crew was busy earning international acclaim in late October resulting from the remarkable discoveries, the cast and crew of the “Midway” movie landed in historic Pearl Harbor to promote the soon-to-be-released movie. The film’s visionary, champion and director Roland Emmerich had hoped to share this story for nearly 20 years.

“I thought what these guys did and how they did it was just incredible. But I also had the feeling, during these times, with nationalism on the rise again, and rightwing parties all over the world, that it’s good to remind people that there were at one point some young Americans who lost their lives fighting fascists,” he told the Columbus Dispatch.

The Pacific Fleet has led internal Navy coordination supporting the movie’s production and pending release since the project was launched. Considerable support and expertise from NHHC contributed to a production that resulted in a compelling but credible depiction of the courage of those who fought in the battle, on both sides.

The Navy provided support for the “Midway” movie around already established Navy operational schedules and at no cost to the Navy.

The U.S. Navy has invested time and energy commemorating those Sailors who went before – in particular those in the Pacific in World War II. The standards of selflessness, commitment and success they established - in spite of the odds – are increasingly important to today’ generation of Sailors who face the Great Power Competition, specifically with China and Russia. Milestones including the 75th anniversaries of the attack on Pearl Harbor and the Battle of Midway were national events, meant to reinforce urgency and battle-mindedness with current uniformed members. For the first time since the end of World War, the naval service faces the real potential for a high-end, blue water conflict.

The United States Navy and its Sailors are determined to keep the Indo-Pacific region free and open. They understand the steep costs of the alternative, and embrace their rich heritage now being celebrated on the big screen, and revealed entombed at sea. 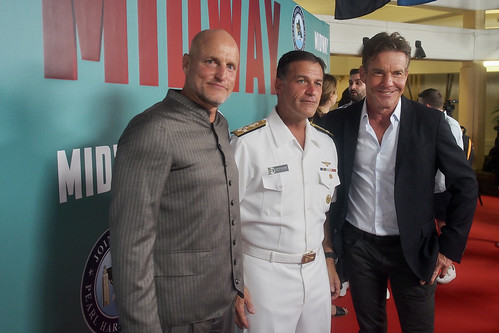 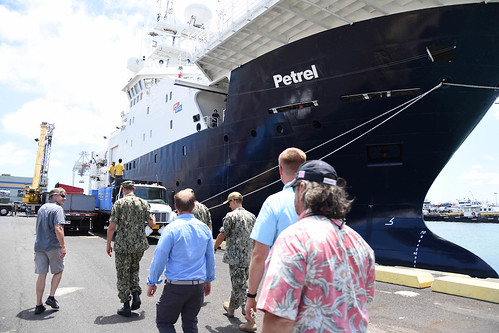 Robert Kraft, left, welcomes members of the U.S. Pacific Fleet staff as they arrive for a professional exchange and visit to R/V Petrel in August. (U.S. Navy/Dave Werner) 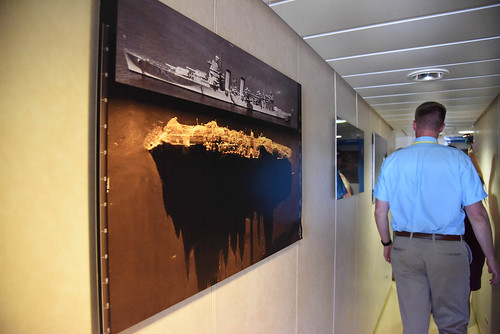 Visitors transit a passageway aboard R/V Petrel lined with images of their discoveries to remind crewmembers of their commitment to honor the ships and Sailors who sacrificed everything to win a free and open Indo-Pacific today. (U.S. Navy/Dave Werner) 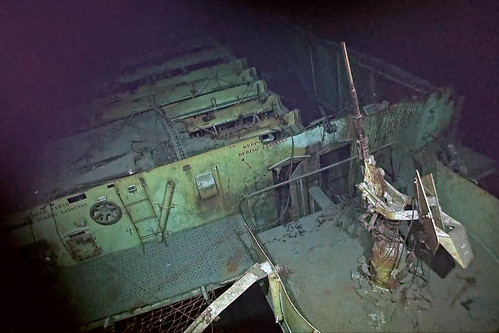 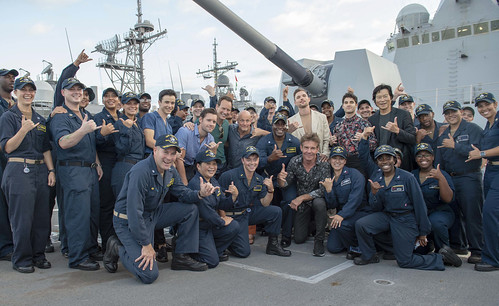 Sailors aboard USS Halsey (DDG 97) pose for a photo with the cast of the movie Midway during a visit to the ship by the actors, Oct. 20. (U.S. Navy/MCSN Aja Bleu Jackson)