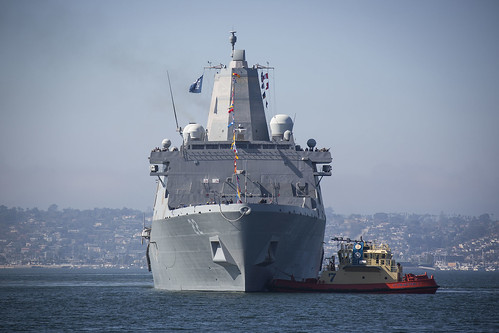 FWSD is an opportunity for the American public to meet their Navy, Marine Corps and Coast Guard teams and experience the U.S. sea services. During fleet week, service members will have the opportunity to participate in various community service events, showcase capabilities and equipment to the community, and enjoy the hospitality of their homeport of San Diego and its surrounding areas.

This year’s Fleet Week is also the first year FWSD is being held during Veterans Week, hosted by the Veterans Association. This year’s events feature a combined effort from Fleet week San Diego Association, the Veterans Association, U.S. Navy, Marine Corps and Coast Guard, which brings an exciting new lineup of events to the weeklong celebration. FWSD will highlight the annual Veterans Day parade, public ship tours from both ships, an open house from Coast Guard Sector San Diego, concerts and much more.

“Military participation in this annual fleet week helps educate San Diego-area leaders and the general public about the U.S. Navy, Marine Corps, and Coast Guard as effective and vital tools of national defense and viable career opportunities for young men and women,” said Rear Adm. Bolivar, commander, Navy Region Southwest. “San Diego is a vital part of our national defense, and this military presence has provided a fiscal benefit to the economic well-being of the region.”

Throughout the week, the local community will have the opportunity to interact with service members while participating in a number of community relations projects and the Innovation Zone at Broadway Pier. There will also be opportunities to tour the ships, enjoy high-tech and military displays and demonstrations. Tour hours for this weekend include Friday, Nov. 8 from 1-4 p.m., and Saturday through Monday, Nov. 9-11, from 10 a.m. to 4 p.m.