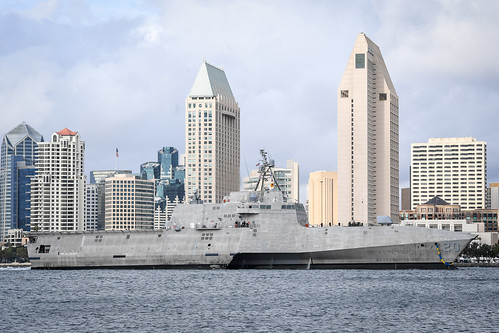 The Navy commissioned Cincinnati, Oct. 5, 2019, during a ceremony in Gulfport, Miss. Cincinnati is the 12th LCS homeported in San Diego under the leadership of Littoral Combat Ship Squadron (LCSRON) 1.

“The crew of USS Cincinnati has put in a tremendous amount of hard work over the last six to seven months from the ship’s pre-commissioning, to bringing the ship to life, to the successful completion of our sail around. Their dedication has been second to none and we are thrilled to deliver Cincinnati to our homeport here in San Diego and to reunite with family, friends, and shipmates,” said Cmdr. Jedediah Kloppel, commanding officer of USS Cincinnati.

This year, the Navy commissioned six LCS, bringing the total to 19 LCS in the fleet. Most recently, the Freedom-class littoral combat ship USS Detroit (LCS 7) departed its homeport of Mayport, Florida, for the U.S. Southern Command area of responsibility on its maiden deployment, Oct. 31. In addition, USS Montgomery deployed to the Indo-Pacific region. Montgomery completed a mid-deployment crew swap this fall demonstrating the ability to stretch operational time across one ship. LCS operate with two crews enabling increased operational time. The two-crew rotation creates flexibility and increased forward-presence. To optimize the two-crew model, off-ship crews train aboard a training ship.

Gabrielle Giffords also deployed this year with the Naval Strike Missile (NSM). The deployment represents a milestone for LCS lethality, marking the first time an NSM sailed into the Indo-Pacific region. During deployment, Gabrielle Giffords fired an NSM, a stealthy missile that flies at sea-skimming altitude, has terrain-following capability, and uses an advanced seeker for precise targeting in challenging conditions.

“Cincinnati is a great ship with an incredible crew. With Cincinnati’s arrival, we now have 12 littoral combat ships homeported in San Diego, and we are extremely proud of the hard work our LCS crews continue to demonstrate every day,” said Capt. Matthew McGonigle, commodore of Littoral Combat Ship Squadron 1.

LCS are fast, agile, and networked surface combatants, optimized for operating in the near-shore environments. With mission packages allowing for tailored capabilities to meet specific mission needs and unique physical characteristics, LCS provides operational flexibility and access to a wider range of ports. LCS will have an offensive punch at range, which then complicates matters for our adversaries. Any potential adversary has to worry about where all our ships are located because of the reach of the weapons systems that we're putting on them.