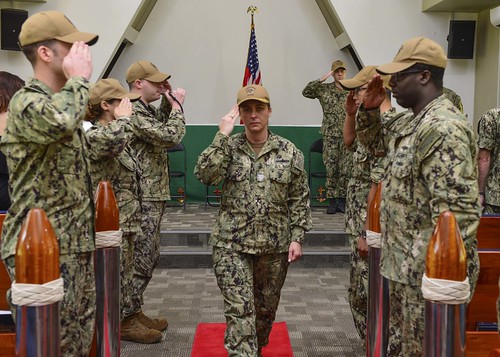 "It is an honor and a privilege to be your commodore,” said McCann. "What you do is hard work, but you do it to the best of your abilities each and every day, making it possible for us to execute our mission."

After reporting as deputy commodore in June 2017, Jerbi assumed command in August, 2018. He led DESRON 7 staff through a multitude of bilateral and multilateral exercises and operations, including the CARAT series, the Southeast Asia Cooperation and Training (SEACAT) exercise, second biennial Pacific Griffin, and the first-ever ASEAN-U.S. Maritime Exercise (AUMX).

"One word that personifies how I feel right now is gratitude," said Jerbi. "Anyone who has been assigned to this command knows how much is really happening and what I am really grateful for is our Sailors, who stand the watch and execute the mission out in the field. You are what makes us successful and I am personally grateful for your efforts."