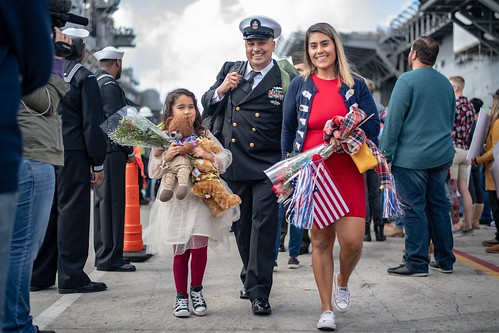 A Sailor assigned to USS Boxer (LHD 4) walks down the pier with his family after the ship's return home to Naval Base San Diego, Nov. 27. (U.S. Navy/MC3 Justin Whitley)

SAN DIEGO - The Sailors and Marines of the Boxer Amphibious Ready Group (ARG) returned to their homeport of San Diego, Nov. 27, following a successful seven-month deployment to the 7th and 5th Fleet operating areas.

“The ARG and MEU team trained hard for this deployment and proved we were ready to operate together as a cohesive team across the world as America’s forward deployed crisis-response force,” said Capt. Jason Burns, commander, Amphibious Squadron 5. “From Bahrain to Jordan and the Philippines, we safely executed multiple exercises with our allied partners in the region. I am extremely proud of our Sailors and Marines and privileged to have had the opportunity to share this deployment with them.”

Throughout deployment, the units of Boxer ARG participated in exercises with multinational partners and allies throughout the Indo-Pacific and Middle East regions, which strengthened partnerships, increased combat readiness and crisis response capabilities, and communication between U.S. and partner nation forces. In the Western Pacific, Sailors and Marines participated in multilateral exercises, including Tiger Strike with Malaysia; Cooperation Afloat Readiness and Training with Brunei; and KAMANDAG 3 with the Philippines. Each exercise presented an opportunity for the amphibious task force to conduct training with each nation’s armed forces and tackle different challenges together.

In the Middle East, the Boxer ARG participated in the multilateral Exercise Eager Lion in the Hashemite Kingdom of Jordan. Eager Lion allowed the 11th MEU to train alongside the Jordanian Armed Forces and other international partners across the full spectrum of military operations, culminating in a live-fire amphibious raid.

“This deployment showed just how capable our blue-green team is,” said Capt. Dale Heinken, commanding officer of USS Boxer (LHD 4). “We overcame every challenge, supported each other, and trained together. We’re returning to San Diego carrying the proof that we’re stronger as a team.”

Heinken, who took command of Boxer mid-deployment after serving as Executive Officer, expressed his gratitude to the crew and their families for their service. “Our crew and embarked staff performed admirably throughout the deployment, and I’m pleased that they can enjoy being home for the holidays.”

“The Sailors of John P. Murtha and Marines of the 11th MEU demonstrated teamwork, pride, and professionalism during the ship's first deployment,” said Capt. Kevin Lane, commanding officer of John P. Murtha. “Every task we were handed, from multi-national exercises to port visits, the blue/green team displayed the best of themselves and the best of the United States. It's been an honor to lead and serve with these men and women and to be a part of the John P. Murtha family.”

“I am extremely proud of all of our Harpers Ferry Sailors and Marines that trained so hard to prepare for the uncertainties of deployment, and it really paid off,” said Cmdr. Janice Pollard, commanding officer of Harpers Ferry. “Their ability to successfully execute each time we were called upon is a testament to our continued drive and determination to be the best. This deployment brought unique opportunities and challenges, which definitely strengthened our Boxer ARG/11th MEU team, strengthened my crew on board warship 49, and strengthened each one of us individually.”

Sailors and Marines of the Boxer ARG also visited several ports during deployment, including Bahrain, Saudi Arabia, Qatar, Jordan, India, Thailand, Philippines, Okinawa, Guam and Hawaii. Crews immersed themselves in diverse cultures and interacted with the local populace through various activities such as tours and community relations projects. 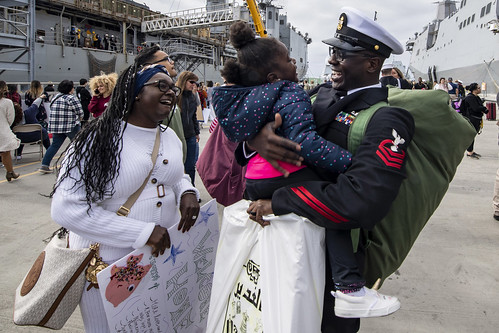 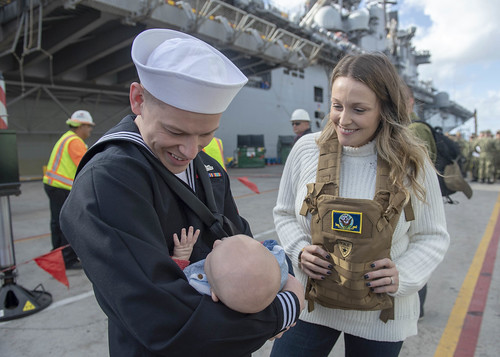 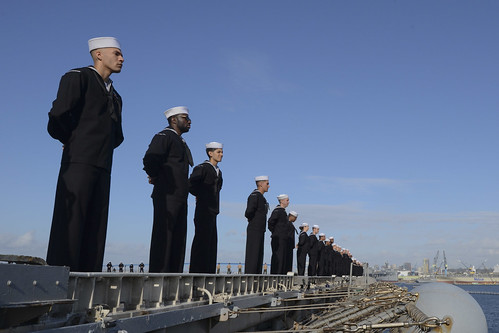 Sailors and Marines man the rails aboard USS Boxer (LHD 4) as the ship nears Naval Base San Diego. (U.S. Navy/MCSN Logan A. Southerland) 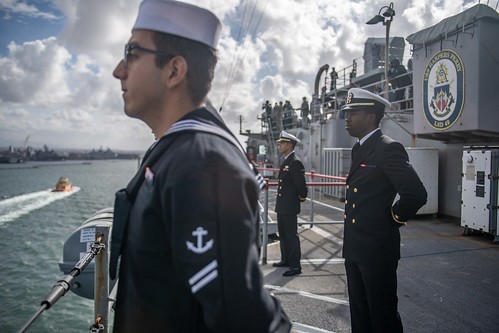 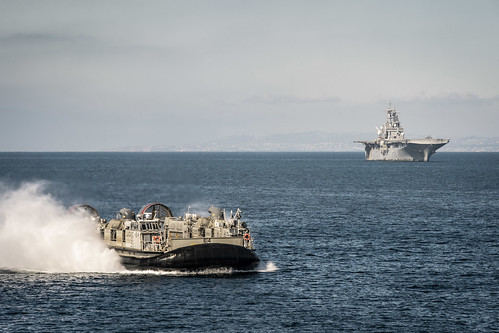 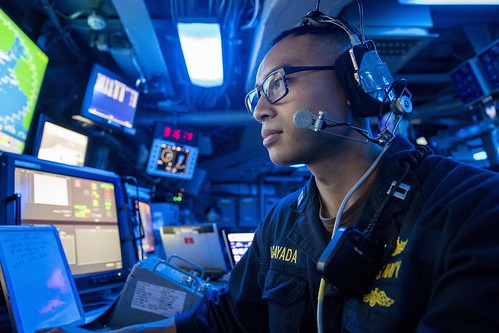 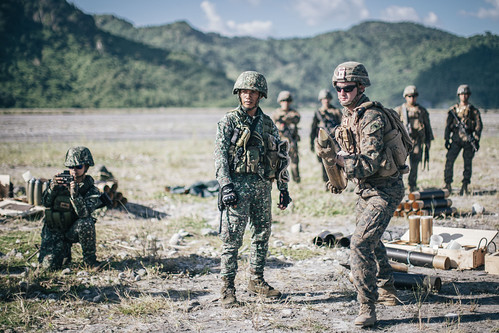 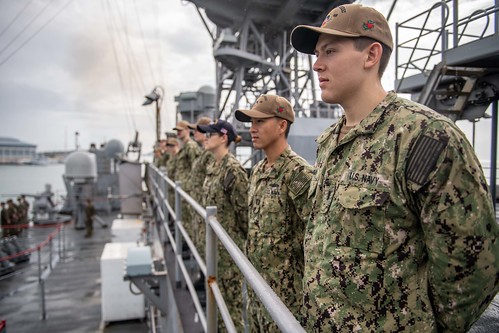 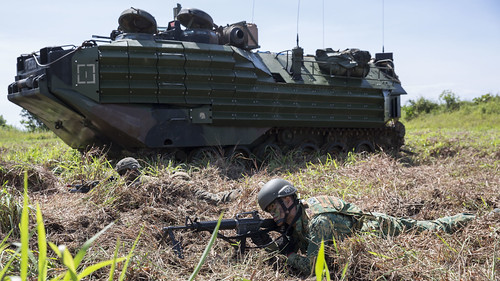 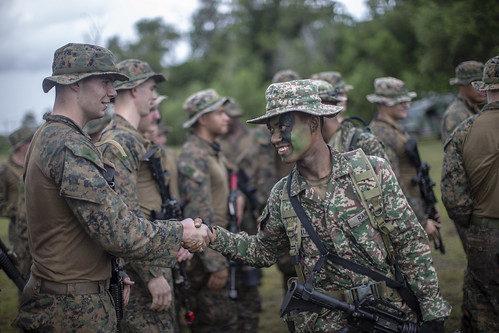 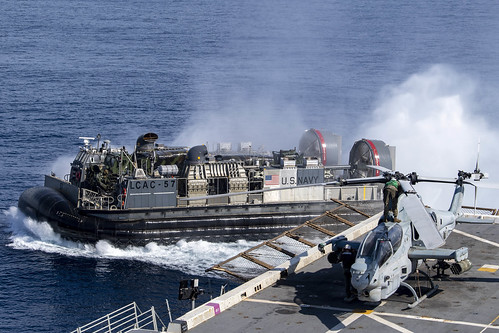 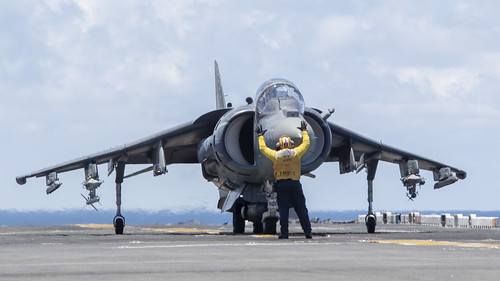 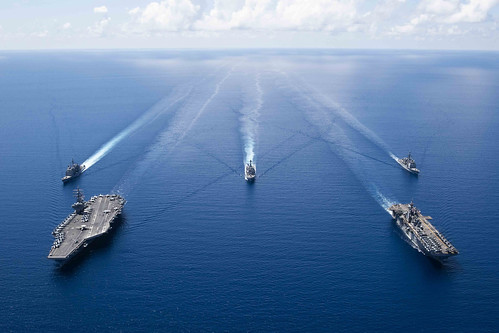 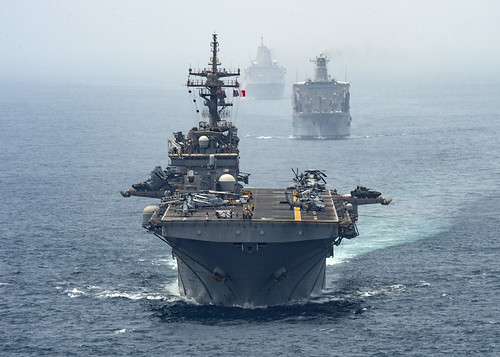