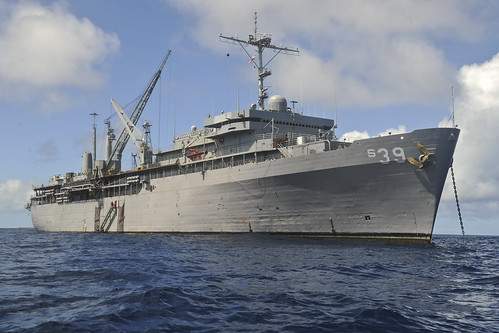 Administered by Yap in the Federated States of Micronesia, Ulithi Atoll consists of 40 small islands, with only four of them being inhabited, and all of the islands surround one of the largest lagoons in the world. The atoll played a major role during World War II for the United States Navy by providing a forward operating base in the Western Pacific.

“It was the logistical hub for the invasions in the Philippines, Leyte Gulf, Iwo Jima, and Okinawa – all of those operations were launched from the base at Ulithi,” said Capt. Michael Luckett, Land’s commanding officer. “At the height, there were as many as 700 ships anchored there in the lagoon, including dry docks, repair ships, tenders, battleships, aircraft carriers, destroyers and sea planes.”

The purpose of Land’s visit is to demonstrate the submarine tender’s ability to return to Ulithi and successfully anchor within the lagoon.

Land deployed small boats while anchored. Luckett said the evolution demonstrated Land could set up shop, bring a submarine alongside, and do all of the things needed inside the lagoon without any support from external sources. Potentially, in a time of conflict, the location could again represent a logistical hub capable of supporting the fleet.

The history of the atoll can still be seen to this day. The airfield on the island of Falalop was used by the Navy during World War II and is still operational. Also, the remnants of a Navy fleet oiler can be found at the depths of the Ulithi lagoon. The USS Mississinewa (AO 59) was sunk while at anchor during an attack by manned torpedoes known as kaitens launched by the Japanese in November 1944.

In 2003, the Navy completed a cleanup operation after it was discovered the oiler was leaking oil into the lagoon. The operation, conducted by Navy divers, included the tapping of storage tanks and ultimately resulted in the pumping off of almost two million gallons of oil still located within the oiler. The oiler still remains in the Ulithi lagoon as a memorial for more than 50 Sailors who lost their lives onboard.

Land departed its Naval Base Guam homeport, Aug. 19, and has been supporting theater security cooperation efforts around the Indo-Pacific region, including engagements in Australia, India and the Philippines.