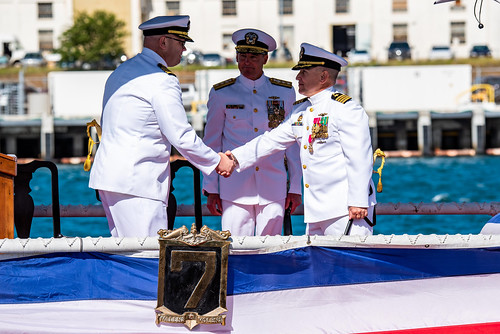 “It’s my great honor to join you here today to participate in one of our Navy’s most hallowed and important traditions – the change of command ceremony,” said Converse. “For over two hundred years command of naval ships has meant more than simply being the person in charge. By tradition, it means complete responsibility, authority and accountability. A wise commanding officer will remember that these are his primary responsibilities.”

“I am very proud of my boats, the work they have done, and more importantly, the results they have earned,” said Davis. “While I was commodore, we deployed five boats in a four month period, sending three of them out the door in less than a month. We transitioned four boats into or out of the shipyard and had four of our boats conduct change of homeports. What do these things all have in common? It’s easy, I had very little to do with them. The boats did the heavy lifting and my staff did the rest.”

During the ceremony, Converse presented Davis with a Legion of Merit Medal for exceptionally meritorious conduct while serving as commander of SUBRON 7 from June 2018 until January 2020.

“Being the commodore of a Pearl Harbor submarine squadron is an incredible job,” said Davis. “However, I think being the commodore of Submarine Squadron 7 is the best job in the world. For the last 18 months, I have had the privilege to work with some of the most talented and most capable submarines ever assembled. It has been the highest honor to roll up my sleeves alongside these submarine warriors.”

Davis’ next assignment will be as a student at The Joint and Combined Warfighting School in Washington D.C.

Majewski comes to SUBRON 7 from Chief of Naval Operations OPNAV N133, where he served as the Deputy Propulsion Program Manager.

“To the boats and families of Squadron 7, I look forward to serving each of you as your commodore,” said Majewski. “As you have been in the past, we will continue to be challenged in the future to meet the needs of our country. Together, as a team, we will be ready to answer this call and keep our nation safe from all who threaten it.” 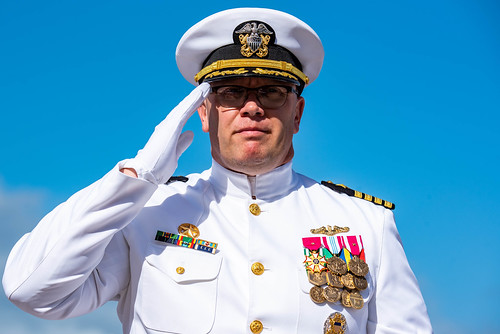