From Center for Surface Combat Systems 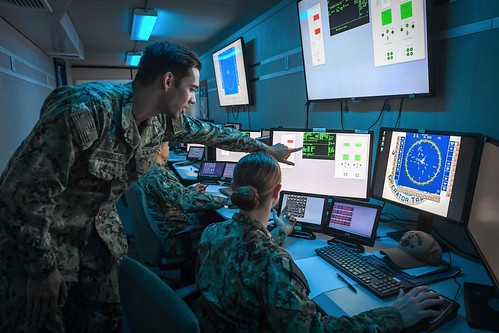 The portable AEGIS trainer has been delivered to both coasts and doubles down efforts to increase combat lethality across the waterfront.

The combat watchstanders of USS Paul Hamilton (DDG 60) and USS Gettysburg (CG 64) were the first to pilot the new virtual trainer. The 40-foot mobile trainer is designed to provide Sailors, like those aboard Paul Hamilton and Gettysburg, high-end tactical training. The ODT succeeds in keeping combat watchstanders proficient during extended maintenance availabilities when a ship’s AEGIS suite might be secured for upgrades. It also provides the unique opportunity to train and qualify new watchstanders in preparation for upcoming patrols.

“At CSCS, our primary mission is to train Sailors how to fight and to win,” said Capt. Dave Stoner, CSCS commanding officer. “Tactical proficiency requires year-round preparation and the ODT is a portable training tool designed to keep those tactical skills sharp and in turn, improve combat readiness by providing better trained, better qualified Sailors to the fight.”

“I’m fresh out of radar school,” said Fire Controlman Aegis 3rd Class Katie Simmons. “With the ODT, I picked up right where I left off. After just two days, I’m already more comfortable with the console.”

CSCS often hosts warships for Advance Warfare Training one to two years after its deployment.

“While a ship is upgraded during that time, many of its most experienced watchstanders will transfer,” explained CSCS Det San Diego’s Warfare Tactics Instructor Lt. Aaron Van Driessche. “We are now looking to exploit those transition years. More upfront opportunities to train as a team like this will deliver a better ship to the Navy and tougher fight to the enemy.”

With six mounted consoles and a pair of large screen displays, the ODT is designed to virtualize the combat suite of today’s cruisers and destroyers. Software applications also allow the ODT to be reconfigured between the various AEGIS baselines and builds of the current surface inventory. As follow-on builds are introduced to the Fleet in continued AEGIS Speed to Capability (ASTOC) upgrades, those same tactical codes will be installed in the ODT for immediate use.

“This is exactly what the fleet needs,” said Lt. j.g. Anthony Kloszewski, an anti-air warfare coordinator assigned to Paul Hamilton. “Our short time in the lab has already proven valuable. Whether you are shaking off rust as a seasoned watchteam or trying to build a new watchteam from the ground up, the ODT is your new venue for proficiency.”

The ODT will be located onboard Naval Base San Diego and Naval Station Norfolk through the end of March before being transported to follow-on fleet concentration areas.

CSCS is a global organization of professional military and civilian educators and support personnel focused on training the Surface Navy to fight and win. CSCS trains over 36,000 U.S. and Allied Sailors a year to operate, maintain and employ weapons, sensors, communications, combat systems and deck equipment of surface warships to build Combat Ready Ships with Battle Minded Crews.