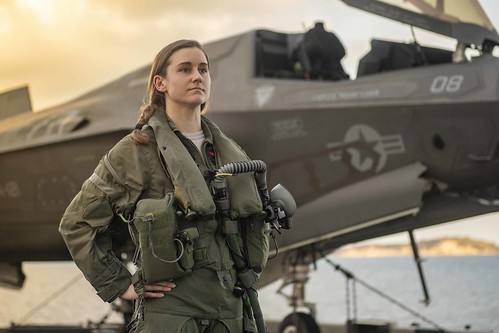 PHILIPPINE SEA - “When I get into the cockpit, it’s like the world shuts off around me and the only thing that matters is the mission,” said Air Force Capt. Melanie Ziebart, a pilot assigned to Yokota Air Force Base. “Being a single-seat fighter pilot is incredibly rewarding and confidence-building because it’s only you in that jet and you’re trusted to figure it out when things go wrong.”

Becoming a fighter pilot in the United States Air Force has been something of a family tradition. It was Ziebart’s parents who inspired her from a very young age, both of whom were fighter pilots. Her father was an F-16 pilot with the 35th Fighter Squadron at Kunsan Air Base, Korea.

Her mother was in the first graduating class of women at the Air Force Academy; an essential asset to paving the way for women in military aviation. After pilot training, she became an instructor for the T-37 and later went on to fly the KC-135.

“I absolutely look up to her,” said Ziebart. “She never let the attitude of men-thinking-women-didn’t-belong-as-pilots deter her. Her positive outlook and determination inspired me throughout my Air Force journey and her experiences taught me that gender doesn’t matter in the cockpit.”

Her parents took her to an Air Force Academy football game where she first watched the Thunderbirds fly over the stadium, that moment would become a significant memory and helped fuel her passion for flying which, combined with inspiration from her parents, cemented her decision to become a pilot.

“Before college I was really dedicated to school and sports,” said Ziebart. “I always knew I wanted to be a fighter pilot, so I worked really hard to set myself up for that goal. My parents both taught me that I could be and do anything that I wanted if I worked hard enough. I always knew that I wanted to serve my country in some way and based on their stories, flying jets didn’t seem like a bad way to do it.”

As she grew older, Ziebart continued towards her childhood goal.

During her time at the University of Southern California, she joined the ROTC program. She became Detachment 060’s Air Force ROTC Distinguished Graduate and Cadet of the Year, to kick-start her career as a pilot.

After graduating, Ziebart was chosen for the Euro-NATO Joint Jet pilot training program at Sheppard Air Force Base, Texas. There, she was officially selected as a fighter pilot and chosen to fly the F-16 Viper, the same aircraft her father flew.

She went on to fly the F-16C with the 80th Fighter Squadron at Kunsan Air Base, Korea. Ziebart said it was a special moment receiving her first orders to the same fighter assignment in Korea her father had 30 years before her and she remembered the moment when she found her father’s name-tag on display at Kunsan.

“I was able to go over there and put my name-tag next to his and get a picture,” said Ziebart. “That was a pretty cool experience.”

She now flies the F-35B Lightning II aircraft aboard the ship, making her an essential asset to three branches of the U.S. military.

“I’m lucky to be surrounded by passionate, dedicated, and talented people,” said Ziebart. “Being in the military has afforded me more opportunities than I ever imagined and flying jets is the best job in the world!”

There are currently six Air Force pilots flying the F-35B in Marine squadrons as a way to disseminate inter-service tactics and strengthen joint-force capabilities. She is the only one among them to deploy with an embarked squadron.

“Because of my assignment with the Green Knights in Iwakuni, I’m the first one lucky enough to deploy on a Navy ship and get the full experience of being an amphibious war-fighter,” said Ziebart.

Switching to the F-35B was completely different for Ziebart. She explained how the jet gives her access to more situational awareness of surface and air threats than the F-16, making her a more efficient fighter pilot. She also enjoys the cutting-edge technology found in the F-35B. Although some of the flying experiences are very different, Ziebart’s fundamental skills of dogfighting and tactically maneuvering a jet transferred quickly to the F-35B.

“The F-35B’s advancement in technology is truly impressive and the amount of information that we get on our giant display is game-changing,” said Ziebart. “It’s such a surreal feeling to take-off, fly at the speed of sound, simulate shooting a missile at an adversary, then drop a bomb and watch it explode on a screen in my jet, and call that my job.”

Her passion for flying is driven by gratifying experiences in the air. She said the most enjoyable part is the unique challenge that comes from flying a new aircraft in a new environment.

“It’s been challenging and humbling to throw myself into an environment that I knew absolutely nothing about,” said Ziebart. “Luckily every Sailor and Marine has been quick to teach me boat-life and keep me from getting lost in the passageways.”

Ziebart’s inter-service experience has been eye-opening. She said she has been involved in planning missions she never knew existed and learned the incredible capabilities of the Navy and Marine Corps team.

“Each ‘first’ is making me a more rounded and confident pilot,” said Ziebart. “I welcome each challenge that Navy-life brings and I’m enjoying the process of learning more about our missions and capabilities here.”

After her exchange with the Marines, she will return to an Air Force squadron and her goal is to teach and mentor young fighter pilots as an instructor.

“I’ve been inspired by the dedication and passion of so many instructors and I would love to contribute back to our community in that way.”

America, flagship of America Expeditionary Strike Group 31st Marine Expeditionary Unit team is operating in the U.S. 7th Fleet area of operations to enhance interoperability with allies and partners and serve as a ready response force to defend peace and stability in the Indo-Pacific region.