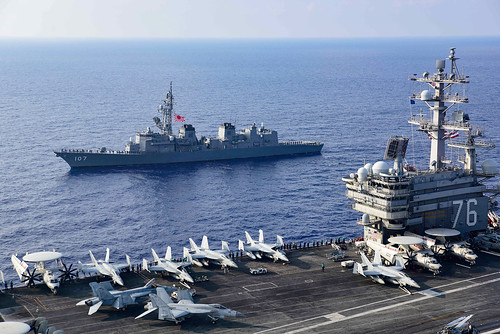 Symbolizing the strength of the two nation's 60-year alliance, the cooperation between forward-deployed naval and air forces, and the Japan Maritime Self-Defense Force (JMSDF) represent ongoing combined operations throughout the Indo-Pacific.

"The USS Ronald Reagan Carrier Strike Group routinely conducts operations to support our nation's commitment to regional stability and freedom of the seas," said Capt. Pat Hannifin, commanding officer, USS Ronald Reagan (CVN 76). "Seamless integration with our allies ensures a lethal and flexible global force, answering the call for prompt and sustained combat operations from the sea. We have utmost respect for our Japan Maritime Self-Defense Force partners and are proud to stand with them on watch in the Western Pacific."

Throughout the operation, Ikazuchi and the Reagan Strike Group operated and trained together, conducting integrated flight operations, high-end tactical training, maritime defense exercises, and a replenishment-at-sea. Ikazuchi and Reagan were also joined by the America Expeditionary Strike Group to enhance integrated operations across a multi-domain warfighting environment. This training strengthened collective integration efforts in support of international norms that foster peace and stability.

"The Japan-US Alliance contributes to maintaining regional peace and stability," said Cmdr. Sugiyama Yasuhiro, commanding officer, JS Izakuchi, "The bilateral exercise such as we conducted will make our relationship stronger. We are making steady progress to realize the free and open Indo-Pacific."

Previous integrated operations this year include USS America (LHA 6) with JS Kunisaki in January; four Destroyer Squadron 15 ships with JS Suzunami and Sawagiri in February; USS Gabrielle Giffords (LCS 10) with JS Terazuki in April and again with JS Kashima and Shimayuki in June; the USS Reagan Carrier Strike Group with JS Teruzuki during a trilateral exercise in July; a mine countermeasure exercise involving USS Pioneer (MCM 9), USS Patriot (MCM 7), and JS Uraga and Bungo also in July; and most recently integrated operations with USS Mustin (DDG 89) and JS Suzutsuki which concluded Aug. 18.

USS America (LHA 6), the flagship of the America Expeditionary Strike Group, is operating in the U.S. 7th Fleet area of operations to enhance interoperability with allies and partners and serve as a ready response force to defend peace and stability in the Indo-Pacific region.

The Ronald Reagan Carrier Strike Group is the U.S. Navy's only forward-deployed carrier strike group and one of America's most visible symbols of resolve. Operating together alongside allies and partners strengthens each nation's collective commitment to international rules-based order. 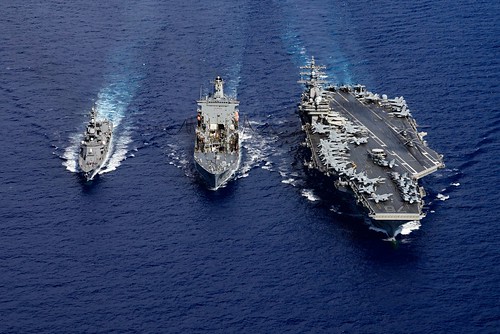