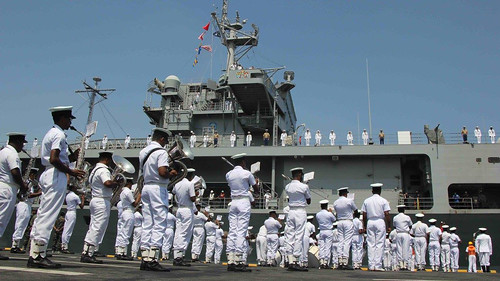 “Our crew onboard Blue Ridge, coupled with the 7th Fleet team, are uniquely poised to get this relationship moving in the right direction and being very positive about it,” said Capt. Kyle P. Higgins, Blue Ridge commanding officer. “I’m excited for this engagement and consider it relatively historic in the very large, strategic scheme of the Navy.”

During the visit, Blue Ridge and 7th Fleet Sailors will mark this engagement through military-to-military sporting events, including baseball, basketball, cricket, soccer and volleyball games, giving servicemembers from both countries an opportunity to practice team building by working together. The games will take place every day during the visit.

“When individuals from different places come together with the same outlook, it creates a team working toward a goal,” said Ship’s Serviceman 2nd Class Jaquan Hartford, Blue Ridge’s sports coordinator. “And, it can create something life-changing.”

FASTPAC will also be conducting a Unites States Embassy (USEMB) engagement via USEMB Colombo, where they will demonstrate their capabilities and provide training to the Sri Lankan Marines from Marine Embassy Guard in CLS and AUC training.

“It's a great opportunity for our Marines to work with and interact with the Sri Lankan Marines,” said Staff Sgt. Christopher Buch, FASTPAC Operations Chief. “It's going to allow us to demonstrate and share some of our tactics.”

Junior officers and petty officers also plan to participate in a cultural exchange with their Sri Lankan counterparts.

“It is an opportunity for us to open communication,” said Lt. Daniel Kohlbeck, Blue Ridge operations officer. “With that, it’s a chance to exchange ideas, conversation and culture, allowing interaction with someone from a different place, a different navy and a different way of seeing things.”

The 7th Fleet Band "Pacific Ambassadors" will be performing a joint concert with the Sri Lanka Army, Air Force and Navy bands.

“We are vey excited to be able to perform with our military musical counterparts during our visit to Sri Lanka,” said Chief Musician Jose Acosta, U.S. 7th Fleet Band Leading Chief Petty Officer. “It will be a wonderful performance and we hope that, through our music, we will further strengthen our relationships and friendship with Sri Lanka.”

This port visit will mark the last port where Blue Ridge is under the command of Higgins. Higgins will be relieved during a change of command ceremony by Capt. Matthew Paradise March 29.

Over 29 years ago, Higgins was scheduled for a port visit in Sri Lanka that ended up being cancelled.

“I’ve been waiting over 29 years to come to this country and I couldn’t think of a better time for it,” said Higgins. “For me, it would be a privilege and an honor to be in someone else’s country, in their port facility, and have their military represented in an official American naval ceremony. I would be deeply honored for that opportunity.”

“There is no bittersweet,” Higgins later continued. “Departing this ship will not be easy for me. I’ve grown some deep roots here. I absolutely love what I do every day. And, I couldn’t be more honored to represent such a fine group of young men and women that make up the Blue Ridge and 7th Fleet team.

“It has been my privilege to be at the helm and to lead this unbelievable group of Sailors. It has, at times, been truly flattering and humbling.”

Blue Ridge has been forward deployed to Yokosuka, Japan for 36 years. As the flagship for 7th Fleet, Blue Ridge is vital in maintaining partnerships in the 7th Fleet area of operations.