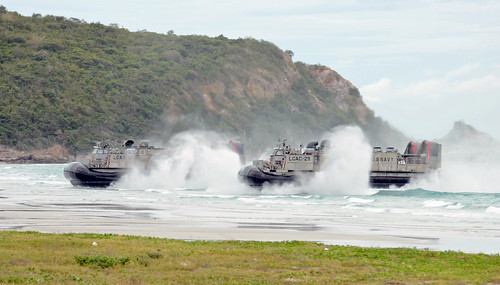 SATTAHIP, Thailand - The 22nd annual Cooperation Afloat Readiness and Training (CARAT) exercise between the U.S. Navy, U.S. Marine Corps, and the Royal Thai Armed Forces will begin June 16 with opening ceremonies at the Royal Thai Navy Base in Sattahip.

CARAT Thailand 2016 will consist of eight days of shore-based and at-sea training events through June 23, designed to address shared maritime security concerns, build relationships and enhance interoperability among participating forces. The exercise will take place in the Gulf of Thailand and in multiple locations ashore across Thailand.

“CARAT remains one of the premier exercise series in the region to develop interoperability between our forces and strengthen ties,” said Rear Adm. John Nowell, commander, Amphibious Force 7th Fleet. “Here in Thailand, I am confident that participating U.S. and Thai forces will advance the tenets that CARAT represents: cooperation and readiness. We stand together with Thailand in ensuring the region is safe, secure, and prosperous.”

At sea, both navies will participate in an air defense exercise, deck-landing qualifications, divisional tactics, a gunnery exercise and will execute a communications drill using the Code for Unplanned Encounters at Sea (CUES). Each event is planned and executed in order to enhance cooperation and increase operational familiarity between the two navies.

After more than two decades of annual CARAT training engagements between the U.S. and Thai Armed Forces, the exercise remains a model for cooperation that has evolved in complexity and enables both nations to refine maritime operations and tactics.

“Similar to CARAT Thailand 2015, this year’s exercise includes events that will allow our navies to operate and train together in multiple warfare areas,” said Captain H.B. Le, commodore, Destroyer Squadron 7. “We can execute complex exercises like CARAT Thailand 2016 because we have built and developed a professional relationship with the Royal Thai Navy through 22 years of operating together at sea.”

CARAT is a series of bilateral naval exercises between the U.S. Navy, U.S. Marine Corps, and the armed forces of Bangladesh, Brunei, Cambodia, Indonesia, Malaysia, the Philippines, Singapore, Thailand and Timor-Leste. CARAT 2016 will be the most complex series to date. Its continuing relevance for more than two decades speaks to the high quality of exercise events and the enduring value of regional cooperation among allies and partners in South and Southeast Asia.