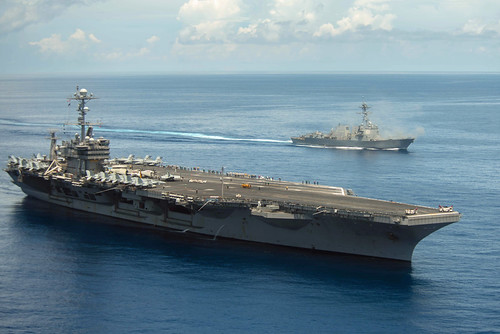 In this file photo, USS Stockdale (DDG 106) fires its 5-inch gun alongside USS John C. Stennis (CVN 74) during a sea power demonstration in the South China Sea for visiting defense officials from Brunei in May. (U.S. Navy/MCSN Tomas Compian)

“The strike group has accomplished our mission in 7th Fleet, fulfilling a vital role in a region the U.S. Navy has operated in for a century and a half,” said Rear Adm. Marcus A. Hitchcock, JCSSG commander. “I am very proud of our Sailors, and I look forward to watching them excel during the upcoming Rim of the Pacific exercise, when they have the opportunity to operate with maritime professionals from 26 different nations.”

JCSSG is slated to participate in the exercise RIMPAC 2016 in Hawaii, the world’s largest international maritime warfare exercise.

During the deployment, JCSSG has been operating as the centerpiece of the Great Green Fleet, using energy efficiency measures, including technologies and procedures, to highlight the Navy’s efforts to transform its energy use to increase operational capability.

The strike group participated in a number of exercises, training, integrating and building capacity with allies in the 7th Fleet region as part of an ongoing rotation of U.S. forces supporting maritime security operations in waters around the world.

In March, JCSSG and other U.S. military forces worked alongside the Republic of Korea armed forces during exercise Foal Eagle. Their time in the area also included passing exercises with the French Navy and Japanese Maritime Self-Defense Force (JMSDF) and wrapped up with Malabar 2016, a trilateral maritime exercise with the Indian Navy, JMSDF, U.S. Navy in June and dual carrier operations with the Ronald Reagan Strike Group.