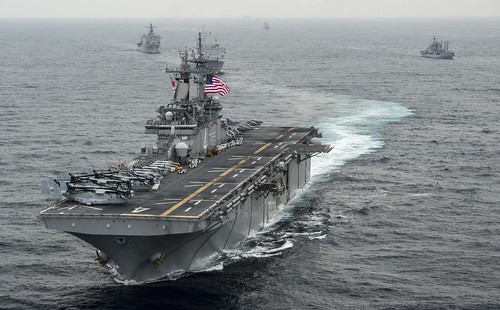 In this file photo, ships of the Boxer ARG steam in formation during exercise Ssang Yong off the coast of South Korea in March. (U.S. Navy/MCSN Craig Z. Rodarte)

While in 7th Fleet, the nearly 4,500 Sailors and Marines of Boxer ARG and 13th MEU will conduct exercises and port visits to enhance maritime partnerships and promote peace and stability in the Indo-Asia-Pacific region.

"The Sailors and Marines of the ARG, MEU performed tremendously when we were here a few months ago conducting bilateral engagements and promoting regional stability," said Capt. Patrick Foege, commodore for Amphibious Squadron 1. "Their performance during exercise Ssang Young was superb and the crews truly enjoyed the port visits in Hong Kong and Thailand. We are looking forward to once again working with our allies and partners in the Indo-Asia-Pacific region."

The amphibious force contains an extensive set of ship-to-shore connectors, by air or by sea, which allow the Boxer ARG and 13th MEU to move people or equipment to any corner of the world needed. Those forces make up the formidable Blue-Green team, which provides a robust set of sea-based capability and in turn can launch Marines ashore.

“As one naval team; together we are prepared to take any operation in the U.S. 7th Fleet area of operations,” said Col. Anthony Henderson, commanding officer of the 13th MEU.

“It's important we shift our focus to the 7th Fleet area of operations quickly,” said Capt. Mike Ruth, Boxer's commanding officer. “We need to refresh on procedures, communications and potential mission sets. Also, with typhoon season approaching, we need to be prepared for the possibility of heavy seas.”

The 7th Fleet area of responsibility includes more than 48 million square miles of the Pacific Ocean, running from the international dateline to the eastern coast of Africa, and from the Antarctic to the Kuril Islands, Northeast of Japan. It contains more than half of the world's population.