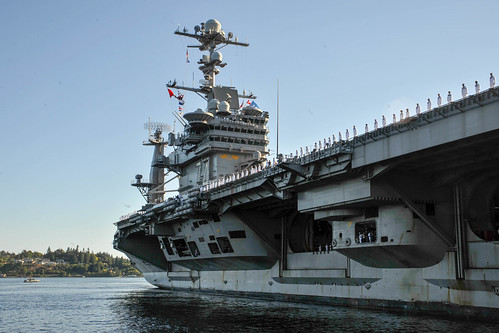 John C. Stennis departed for deployment from Bremerton Jan. 15, and operated in both U.S. 3rd and U.S. 7th Fleet areas of operation, including more than 60 days in the South China Sea.

“The crew of John C. Stennis should be proud of what they’ve accomplished this deployment and their families should be proud of them, just as I am,” said Capt. Greg Huffman, John C. Stennis’ commanding officer. “They carried out difficult and demanding missions far from home, and carried them out with exceptional professionalism in the finest tradition of naval service. They are a magnificent crew.”

During deployment, John C. Stennis worked together with allied nations, participating in multinational exercises including Foal Eagle with the Republic of Korea military, Malabar with the Indian Navy and Japan Maritime Self-Defense Force, and RIMPAC, the world’s largest international maritime exercise, with twenty-six participating nations, 40 ships and submarines, more than 200 aircraft and 25,000 personnel.

John C. Stennis made port calls to Guam, South Korea, Singapore, Philippines and Hawaii. Sailors had the opportunity to experience local cultures on their own or through Morale, Welfare and Recreation (MWR) tours.

“I wanted to take a tour and see something I would never have normally seen,” said Aviation Boatswain’s Mate (Equipment) Airman Elisabet Laboymendez, from San Jaun, Puerto Rico. Laboymendez took an MWR sponsored tour of the Taal Volcano in the Philippines.

“You have had an incredible cruise,” said Vice Adm. Nora Tyson, commander, 3rd Fleet, speaking over the 1MC as the ship pulled into San Diego. “You have done an incredible job throughout the deployment and workups and I could not be more proud of you. Your professionalism, your dedication has been evident at every turn.”