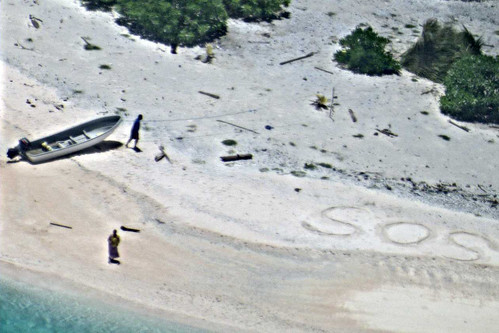 APRA HARBOR, Guam - Two mariners who were stranded on an uninhabited Pacific island in Chuuk State, Federated States of Micronesia are safe, Friday, after writing “SOS” in the sand.

A Navy P-8A Poseidon aircraft crew from Patrol Squadron (VP) 8 was responding to a report from AMVER vessel British Mariner of flashing lights when they spotted survivors on the beach near the makeshift sign, Aug. 25. This information was relayed back to search and rescue watchstanders at Coast Guard Sector Guam. The survivors were then picked up and transferred by the patrol boat Palikir to Nomwin Atoll.

Watchstanders at Sector Guam command center received notification Aug. 19 from Pan-Pacific Education and Communication Experiments by Satellite (PEACESAT) of an overdue 18 ft. vessel with two people aboard en route to Tamatam Island, Federated States of Micronesia. On Aug. 17, the couple departed Weno Island with limited supplies and no emergency equipment on board en route to Tamatam with an expected arrival of Aug. 18.

On Aug. 24, while conducting a search pattern based on coordinates provided by U.S. Coast Guard Sector Guam the AMVER vessel British Mariner spotted light signals from a nearby island. Based on this information, Sector Guam requested deployment of a U.S. Navy P-8 aircraft to investigate the source of light. On Aug. 24 the Navy P-8 located the survivors. Sector Guam then coordinated with the patrol boat Palikir who picked up the survivors on Aug. 26.

AMVER (Automated Mutual Assistance Vessel Rescue System), sponsored by the U.S. Coast Guard, is a computer-based voluntary global ship reporting system used worldwide by search and rescue authorities. With AMVER, rescue coordinators can identify participating ships in the area of distress and request the ships' to divert and respond.