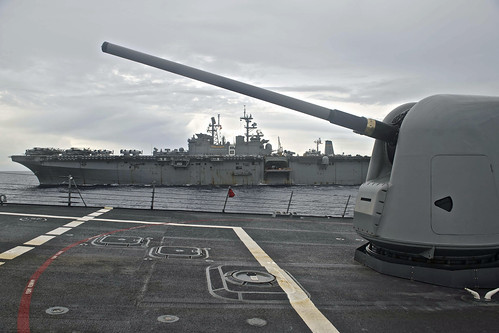 “The seamless integration of CRUDES capabilities into the expeditionary force enhances the already dynamic capabilities inherent in the embarked Marine Expeditionary Unit,” said Rear Adm. Marc H. Dalton, commander, Expeditionary Strike Group 7, who also commands the BHR ESG. “I’m proud of the professionalism displayed by our teams in maximizing the training during this event and capturing lessons that will improve our warfighting readiness.”

The BHR ESG consists of amphibious ships included in a traditional amphibious ready group along with the staff structure to deploy with surface ships, expanding the mission sets and capability of the ESG. The drills were meant to test the ESG 7 staff and subordinate units and associated staffs in being able to rapidly integrate destroyers like Spruance and Decatur.

The PAC SAG, serving forward under the operational control of U.S. 3rd Fleet and commanded by Destroyer Squadron (CDS) 31,deployed in April as part of a three-ship group consisting of Spruance, Decatur, USS Momsen (DDG 92) and embarked helicopter detachments of HSM 49 to conduct maritime security operations in the Indo-Asia-Pacific theater. While Spruance and Decatur conduct routine patrols in the Western Pacific, Momsen is conducting an Oceania Maritime Security Initiate (OMSI) mission.

The BHR ESG is currently on a routine patrol in U.S. 7th Fleet area of operations in support of security and stability in the region.