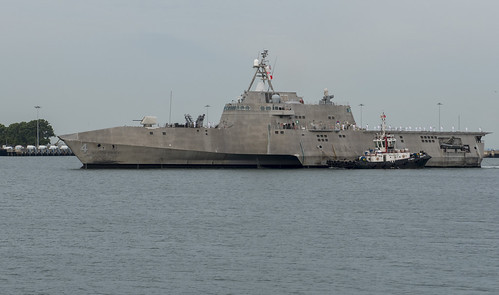 Coronado’s arrival in Singapore marks the first deployment of an Independence-variant littoral combat ship to Southeast Asia and the third overall, following USS Freedom (LCS 1) and USS Fort Worth (LCS 3). Coronado, homeported in San Diego, will operate from Singapore as a maintenance hub and exercise with allied and partner navies across the region during her deployment.

“The rotational deployment of littoral combat ships is an important part of our nation’s rebalance efforts to the Indo-Asia-Pacific,” said Rear Adm. Don Gabrielson, Commander, Task Force 73. “Littoral combat ships are ideal for South and Southeast Asia, easily integrated into exercises and operations in the shallow and congested sealanes, enhancing U.S. presence and deepening ties with allies and partners. Littoral combat ships are in high demand out here – we’re happy to welcome Coronado and her crew.”

“Coronado is one of our Navy’s most advanced platforms operating in the U.S. 7th Fleet,” said Capt. H. B. Le, commodore, Destroyer Squadron 7. “Having an Independence variant deployed to South and Southeast Asia will further expand the operations we can conduct with regional navies, as well as the rest of the AOR.”

Coronado and its combined crew of about 100 Sailors and the embarked Helicopter Sea Combat Squadron (HSC) 23, began their deployment June 22, after departing San Diego. Prior to her arrival in Singapore, Coronado participated in the multinational Rim of the Pacific 2016 exercise, in which the ship conducted a Harpoon Block 1C missile LCS-based launch, the first of its kind.

“This crew has worked very hard both preparing for and executing this deployment,” said Cmdr. Scott Larson, commanding officer, USS Coronado. “They are ready to continue their hard work alongside partner and allied nations, building capacity and enhancing interoperability in this strategically-important theater of operations.”

Prior to Coronado’s deployment, the littoral combat ship USS Fort Worth (LCS 3) spent more than 16 months rotationally deployed to Singapore. During the first 14 months of the ship’s deployment, Fort Worth participated in the search and recovery efforts for AirAsia flight QZ8501, made 12 port visits in South and Southeast Asia, and participated in 10 bilateral and multilateral exercises across the Indo-Asia-Pacific region.

Fast, agile and mission-focused, LCS are designed to operate in near-shore environments and employ modular mission packages that can be configured for surface warfare, anti-submarine warfare or mine countermeasures.