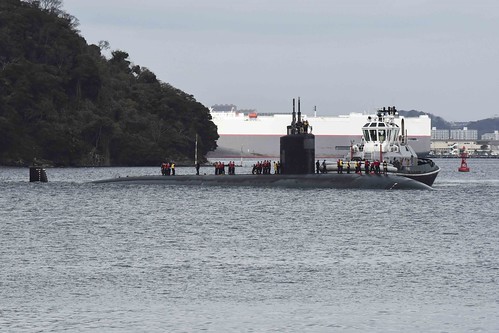 "The crew and I are excited to visit Japan, one of our strongest and closest allies and to experience the region's rich heritage and culture," Cmdr. Kenneth Douglas, commanding officer of Pasadena said in a news release. "Pasadena's presence in the Western Pacific demonstrates our commitment to the security and stability of the region and will help strengthen our ties with our partner nations."

Sailors said they were looking forward to getting ashore. "I think Japan has a very unique culture," Logistics Specialist 1st Class Tyler Woline said in a release on Alexandria's visit. "I'm looking forward to seeing a different way of life and eating some great food that I have never had before."

Douglas said Pasadena's crew has performed exceptionally well during the first half of their deployment, conducting a multitude of missions and maintaining proficiencies of the latest capabilities of the submarine fleet.

"Alexandria departed the shipyard in Portsmouth, New Hampshire a little over one year ago," said Cmdr. Todd Santala, commanding officer. "Today the ship is at the front line of the United States Navy and the submarine force, ready to conduct any mission in the [Indo-Asia-Pacific region]. It is a privilege for me to share this experience with my crew and enjoy our first liberty port together in Sasebo, Japan."

Both Alexandria and Pasadena are improved Los Angeles-class attack submarine with some of the most advanced submarine systems in the world and each are capable of executing anti-submarine warfare, anti-surface ship warfare, strike, naval special warfare involving special operations forces, irregular warfare and mine warfare.

"The Pasadena Sailors look forward to enjoying the change of season Japan has to offer," added Senior Chief Petty Officer Matthew Kwiecinski, chief of the boat. "The officers and crew will enjoy some well-deserved rest prior to beginning the second leg of a demanding deployment."