Coronado returns to Singapore after operations at sea 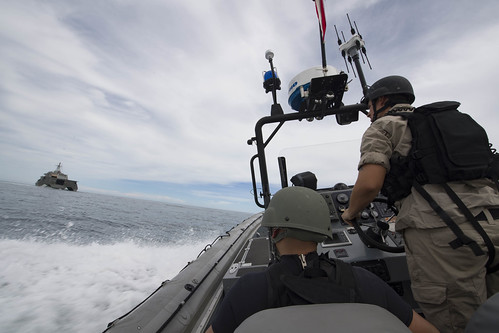 After completing the four-day port visit in Brunei, Coronado conducted a passing exercise and visit, board, search and seizure (VBSS) training at sea with the Royal Brunei Navy (RBN) patrol vessel Daruttaqwa in the South China Sea. The ship then transited through the Balabac Strait and into the Sulu Sea for routine operations before heading back to port in Singapore.

“Working alongside the RBN at sea gave our Sailors a unique opportunity to practice operational tactics and enhance bilateral capabilities with a regional partner,” said Cmdr. Scott Larson, commanding officer, USS Coronado. “Training together increases our interoperability and helps ensure that we are ready to execute real-world operations if called upon.”

Training at sea with a regional partner for the first time while deployed to U.S. Seventh Fleet provided unique opportunities for the crew. Lt. j.g. Anthony Grayson, officer-in-charge, Surface Warfare Det. 2, talked about the importance of the VBSS training.

“Working with the RBN gave the Coronado boarding team a chance to practice our skills onboard a vessel unfamiliar to our team,” said Grayson. “We were able to conduct a realistic scenario while training alongside a trusted partner, raising the readiness of both participating groups by sharing methods and tactics.” Once operations with the RBN were complete, the Coronado crew maintained a full schedule of unit-level training, including a crew served weapons exercise, damage control and man overboard drills, small boat and flight operations, and engineering operational checks.

Flight operations with the embarked MH-60S Seahawk helicopter and MQ-8B Fire Scout unmanned helicopters were a primary focus of the underway according to Lt. Cmdr. Thanh Nguyen, officer-in-charge, Helicopter Sea Combat Squadron (HSC) 23 Det. 5. “Pilots, aircrewmen and maintainers were given the opportunity to refine their skills and proficiency at landing and operating on a ship operating at sea,” said Nguyen. “The gunnery exercise also allowed our sailors to shoot and remain current on our weapons systems.”

The port visit to Brunei included multiple ship tours and a static display of the embarked MH-60S Seahawk helicopter and MQ-8B Fire Scouts for the Royal Brunei Air Force. Coronado sailors also participated in a sports day with RBN counterparts, competing in a soccer game and tug-of-war match at the Naval Training Center in Muara, Brunei.

Currently on a rotational deployment in U.S. 7th Fleet, Coronado is a fast and agile warship tailor-made to patrol the region’s littorals and work hull-to-hull with partner navies, providing 7th Fleet with the flexible capabilities it needs now and in the future.