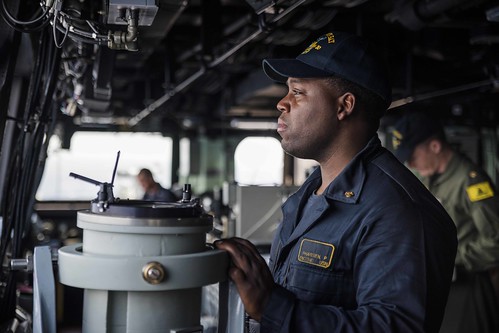 Green Bay recently returned to sea after successfully completing exercise Cobra Gold 2017 (CG17) Feb. 24, operating in the Gulf of Thailand and various locations throughout the Kingdom of Thailand. Cobra Gold is an annual joint/coalition multinational exercise and is the latest in the continuing series of U.S.-Thai military exercises designed to ensure regional peace and stability.

During CG17, Green Bay Sailors and 31st MEU Marines demonstrated their ability to conduct multinational amphibious operations with partner nations throughout the exercise.

“Our Sailors and Marines performed magnificently,” said Moyer. “The exercise was very complex and challenging, and it required a lot of flexibility and professionalism from everyone, but we pushed forward and met every mission requirement. Team Green Bay had a great exercise that we can be proud of.”

After Green Bay returned to sea, the crew used the routine patrol in the South China Sea as an opportunity to improve as a ready maritime force by improving inter-ship communications and maneuvering skills.

“I’m proud of the watch standing proficiency of everyone involved in this transit and look forward to continuing to serve forward to strengthen relations with partners and allies” said Moyer.

The patrol has been an opportunity for junior Sailors to refine maritime skills through professional encounters at sea, whether by bridge-to-bridge conversations or whistle signals sounded in accordance with the Maritime Rules of the Road.

Green Bay, with embarked 31st MEU, is serving on a multi-month patrol from its forward deployed base of Sasebo, Japan, operating in the Indo-Asia-Pacific region to enhance partnerships and be a ready response force for any type of contingency.