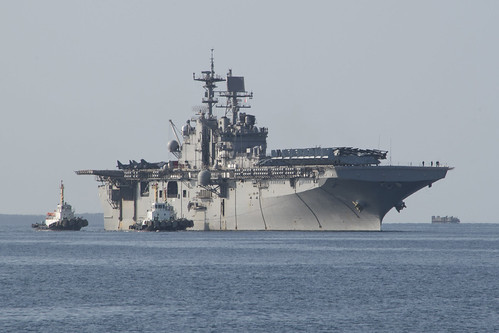 During the port visit, the ship will embark Marines of the 31st Marine Expeditionary Unit (MEU), along with their vehicles and cargo prior to departing for a routine patrol.

“We are going to be very busy while in port receiving a variety of equipment and assets,” said Gunnery Sgt. Matthew Armour, a combat cargo senior non-commissioned officer in charge. “There will be a lot of moving parts that have to be properly secured for sea.”

Armour explained that the primary focus will be preparing for Amphibious Integration Training (AIT) and certification exercise (CERTEX).

“We want to make sure that 31st MEU is able to accomplish any mission they are called for, said Armour.”

"I couldn’t be more impressed with the crew’s performance in just one week,” said Capt. Jeffrey Ward, Bonhomme Richard’s commanding officer. To accomplish as much as they have in such a short amount of time takes real teamwork and professionalism.”

Bonhomme Richard and 31st MEU are scheduled to conduct a routine patrol, operating in the Indo-Asia-Pacific region to enhance warfighting readiness and posture forward as a ready-response force for any type of contingency.