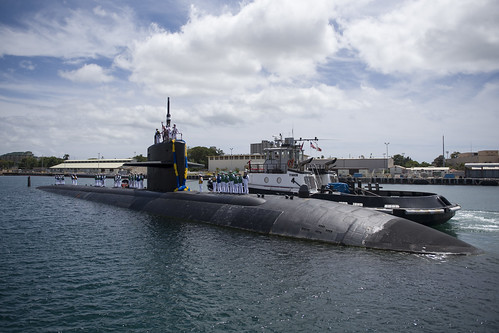 "I am exceptionally proud of the crew's efforts to prepare for, sustain and successfully execute every phase of this deployment - from our initial training more than a year ago, to the final transit home," said Cmdr. David S. Cox, Louisville's commanding officer and native of Dallas, Texas. "As commanding officer, it has been my privilege to lead such a fine group of professional young men in carrying out our nation's most important taskings, and I could not be prouder of their accomplishments."

While on deployment, 28 submariners earned the right to wear the submarine warfare insignia, also known as "dolphins."

More than half the crew rotated out of the Louisville following her 2015 deployment. For many of the crew, this was their first deployment, said Master Chief Fire Control Technician Larry E. Williams, USS Louisville's chief of the boat, a native of Silver Spring, Maryland.

"The senior members of the crew did an outstanding job mentoring and teaching the younger Sailors at the deckplate level," said Williams. "Through hard work and cooperation, all hands safely operated the boat in some of the most challenging environments into which we send submarines."

"There is nothing like climbing the ladder and coming topside after more than 60 days underway," said Machinist's Mate (Nuclear) 2nd Class Matthew R. Lesnick, a native of Ft. Lauderdale, Florida. "I have never been underwater for that long so when we came up in South Korea, the smell of the fresh air and cold weather was a striking difference from what we left behind in Hawaii."

The deployment also marked a major milestone for the Louisville as she celebrated her 30th anniversary in commissioned service on November 8.

"This birthday underscored Louisville's continued tactical relevance, from the Cold War to the present despite being older than the majority of her crew," said Cox.

Louisville is the fourth United States ship to bear the name in honor of the city of Louisville, Kentucky and the 35th Los Angeles-class fast-attack submarine commissioned in 1986. The submarine measures 360 feet long and displaces more than 6,900 tons. 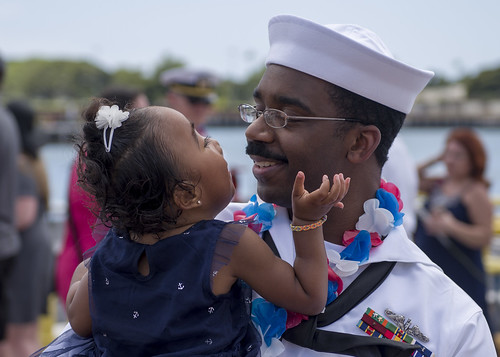