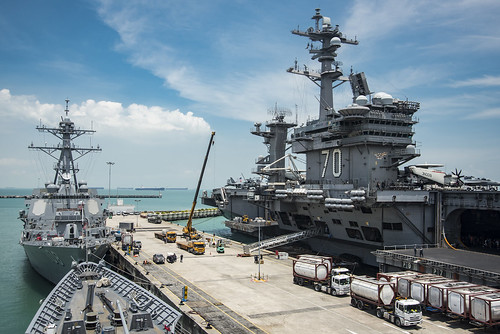 Prior to the visit, the Carl Vinson Strike Group completed two weeks of routine operations in the Asia-Pacific region, including maritime exercises with the Republic of Korea Navy and Japan Maritime Self-Defense Force. The ship also operated in the South China Sea during this deployment.

“This port visit reaffirms our commitment to the U.S.-Singapore defense relationship and our shared belief that lawful use of the sea and airspace are essential to prosperity, stability and security for all nations in the Pacific," said Rear Adm. Jim Kilby, CSG-1 commander. “We greatly appreciate the opportunity to return or in many cases visit this great country for the first time.”

"Vinson Sailors are excited about Singapore and this port visit,” said Capt. Doug Verissimo, Carl Vinson commanding officer. “They tirelessly execute the carrier’s mission in providing a presence here in the Indo-Asia-Pacific region. They work hard to better themselves personally and professionally, and now they have an opportunity to get some well-deserved rest and take in the sights and culture of Singapore."

Additionally, members of Carl Vinson’s Junior Enlisted Association and Second Class Petty Officers Association will volunteer at a food bank where they will move food and receive donations.

The strike group will continue on their regularly scheduled Western Pacific deployment after departing Singapore.

U.S. Navy aircraft carrier strike groups have patrolled the Indo-Asia-Pacific routinely for more than 70 years. Carl Vinson has deployed to the region and has operated in the South China Sea during 16 separate deployments over its 35-year history.

While deployed, Carrier Strike Group 1 will remain under U.S. 3rd Fleet command and control, including beyond the international dateline which previously divided operational areas of responsibility for 3rd and 7th Fleets. Third Fleet operating forward offers additional options to the Pacific Fleet commander by leveraging the capabilities of 3rd and 7th Fleets.