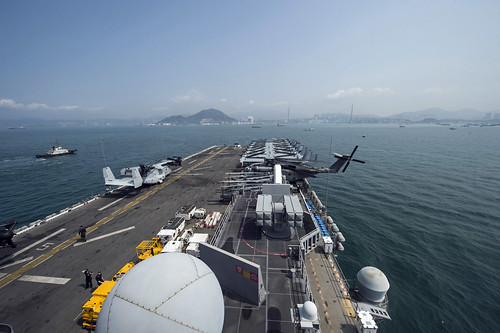 The port visit will allow the Sailors and Marines to experience the local culture and conduct community relations projects.

Makin Island's commanding officer, Capt. Mark Melson, said port visits and liberty give the crew and embarked Marines a valuable opportunity to experience and gain an appreciation for new cultures.

"The Makin Island team is grateful for the opportunity to visit Hong Kong," said Melson. "Our Sailors and Marines are looking forward to exploring this fantastic city and experiencing all the area has to offer. For many, it’s their first time to Hong Kong, and for all of us it’s a chance to interact with the local population as we continue to strengthen our partnership."

Sailors and Marines are scheduled to participate in several community outreach events during their visit, including sporting events, cultural exchanges, and activities with students at local primary and secondary schools.

Makin Island houses nearly 1,100 Sailors and 1,500 Marines, and is a multi-mission platform capable of launching and recovering fixed- and rotary-wing aircraft and amphibious landing craft.

The MKI ARG/11th MEU provides senior U.S. military leadership and coalition partners with a flexible force able to rapidly respond to contingencies and crises within a region. With ships, aircraft, troops, and logistical equipment, the ARG/MEU is a self-contained and self-sustained task force capable of conducting everything from combat operations to providing humanitarian assistance.