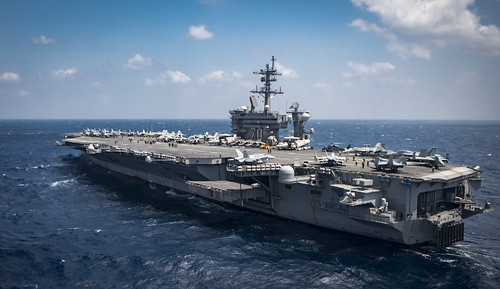 Deployed from San Diego, California, to the Western Pacific since Jan. 5, the Strike Group has participated in numerous bilateral exercises with the Japan Maritime Self Defense Force and Republic of Korea Navy, various maritime security initiatives, and routine patrol operations in the South China Sea.

For more than 70 years, the U.S. Navy has maintained a persistent naval presence in the Indo-Asia Pacific. The U.S. Navy is committed to continuing this forward presence, which is focused on stability, regional cooperation and economic prosperity for all nations. Carl Vinson has deployed to the region several times, starting with a deployment to the Western Pacific in 1983, a year after commissioning. Most recently in 2015, Carl Vinson conducted port visits and exercises with regional navies in the South China Sea.

U.S. 3rd Fleet leads naval forces in the Pacific and provides the realistic, relevant training necessary for an effective global Navy. Third Fleet constantly coordinates with U.S. 7th Fleet to plan and execute missions based on their complementary strengths to promote ongoing peace, security, and stability throughout the entire Indo-Asia-Pacific theater of operations.