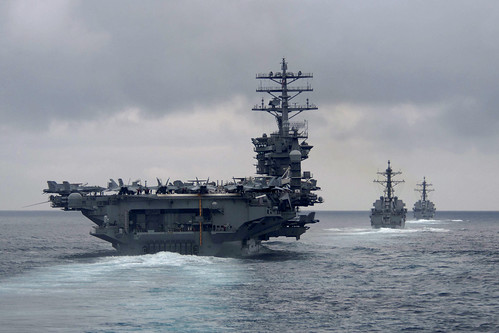 Ships of the Nimitz Carrier Strike Group participate in a show of force strait transit exercise while underway for COMPTUEX in late March. (U.S. Navy/MC3 Maria I. Alvarez)

The aircraft carrier USS Nimitz (CVN 68) completed a nearly two-year yard period at the Puget Sound Naval Shipyard in September of last year. Since then they have undergone sea trials, Tailored Ship’s Training Availability (TSTA) I, TSTA II, TSTA III, Final Evaluation Phase and the Board of Inspection and Survey.

Nimitz has been joined by the rest of her strike group for the first time since its previous 2013 deployment, to conduct the COMPTUEX, which is the 7th and final part of the ship, her crew and the strike group’s training cycle.

COMPTUEX is an exercise that tests a strike group’s ability to work and operate as one cohesive unit in a simulated real-world scenario based training environment.

“COMPTUEX is the final building block the Navy uses for training to put the strike group through an integrated joint exercise before going on deployment,” said Commander, CSG 15, Rear Adm. Ross A. Myers. “This is where the strike group really comes together as a fighting force.”

Teamwork is essential with a deployment just over the horizon. Although Nimitz acts as the central hub for CSG 11, the ship relies on the entire strike group, to include Destroyer Squadron (DESRON) 9 and Carrier Air Wing (CVW) 11, to prove their operational capabilities prior to deploying.

Nimitz was joined by multiple squadrons of CVW 11 during sea trials in October of last year to gain experience and alleviate some of the stress that integrating a full strike group for the first time can bring, especially in a condensed timeline like the one Nimitz and CSG 11 are experiencing. COMPTUEX is the first time that the rest of CVW 11 and DESRON 9 have operated alongside Nimitz.

During the exercise, the strike group encounters an environment that mirrors, as closely as possible, what they may encounter while deployed in future areas of operation. They are given operational scenarios and must respond accordingly. COMPTUEX is normally designed to be broken up into two separate phases.

Phase I closely follows a schedule of events (SOE) that acts as a training phase for Sailors and watchstanders. They know what to expect and when it is coming. This phase allows them to get an initial look at operational requirements and how the strike group functions together in various scenarios.

Phase II provides the strike group with a scenario that doesn’t follow an SOE. The strike group must respond to the best of their ability without knowing what to expect. This phase is intended to overwhelm the Sailors and give them the closest experience to a real-world scenario that training can provide.

COMPTUEX not only prepares the individual ships of CSG 11 to operate as a unit, but also gives them insight into operating with forces outside of their strike group.

While the initial phase of COMPTUEX is meant to allow Sailors to gain experience and ease into the high stress environment with the guidance of CSG 15, Myers and other Sailors from CSG 15 act as the grading entity and will ultimately decide if CSG 11 is prepared to deploy.

“Everything is scored,” said Myers. “Everything is looked at and evaluated to see how all the ships and Sailors are working together as a unit. Navy mission essential tasks capture these tasks and are what we grade. This criteria is what we hold everyone to in order to make sure there is a standard across the board, across the Navy.”

Not only are Sailors throughout the strike group getting an invaluable opportunity to train together, the team hosted Commander, Carrier Strike Group (CSG 12) Rear Adm. Kent Whalen, who came onboard during Phase II to observe the exercise and better prepare his team when the time comes to train.

It will be up to CSG 11 to come together in a coordinated effort to perform and carry-out specific objectives to prove that they are deployable.

“What we try to do is remove the personalities and the subjectivity when evaluating and get down to objectivity,” said Myers. “We train and mentor the entire time, but in the end it comes down to one thing, CSG 15 is here to certify ready for deployment.” Sailors aboard Nimitz have continuously shown their ability to succeed despite being met with an expedited workup cycle. While COMPTUEX is not yet over, Nimitz is continuing to show their ability to perform in stressful situations.

“Nimitz strike group will achieve the highest levels of readiness and preparedness possible, whether they believe it or not right now,” said Myers. “That I can guarantee.” 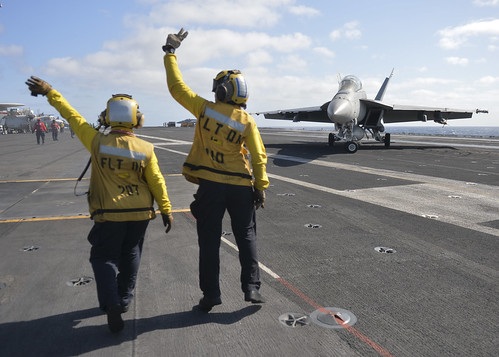 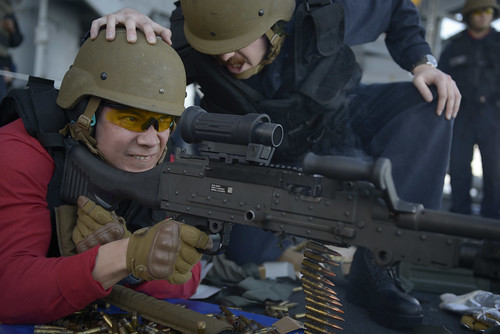