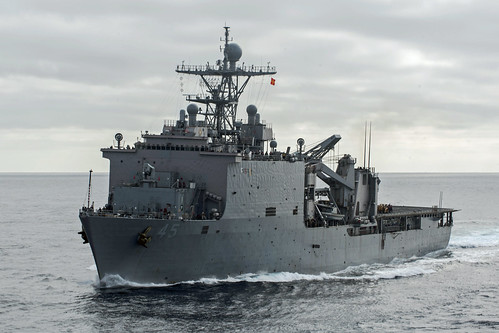 During the visit, Marines and Sailors with the Makin Island Amphibious Ready Group (ARG)/11th Marine Expeditionary Unit (MEU) will train alongside the PNGDF to improve their ability to provide security for national-level events, such as the national elections this year and the Asia-Pacific Economic Cooperation annual summit in 2018.

“We are honored to be here as a demonstration of the U.S. Navy and Marine Corps' commitment to strengthen ties with Papua New Guinea's forces and build on the great work accomplished during Exercise Koa Moana 2016," said Cmdr. Bradley Coletti, commanding officer of Comstock. “Our Sailors and Marines are looking forward to spending time with their counterparts and developing a better understanding of the deep historic ties we have here.”

The bilateral training will cover a variety of skill sets, but will focus on military support to civil authority tactics and procedures, which include entry control and vehicle check points, escalation of force tactics, personnel searches, urban patrolling, and VIP escorts.

“Our Marines and Sailors bring a wide variety of unique capabilities that go beyond the scope of combat operations,” said Lt. Col. Patrick Reynolds, commanding officer, Combat Logistics Battalion 11, 11th MEU, and commander of Marine Corps troops embarked aboard Comstock. “Training alongside our Papua New Guinea counterparts is an opportunity to exchange knowledge on security, law enforcement, and logistical procedures, which are valuable capabilities for all militaries.”

This is the sixth military-to-military TSC exchange for the Makin Island ARG/11th MEU during their deployment to the Indo-Asia-Pacific and Middle East regions. Comstock serves as a sea-base for a number of Marine Corps missions from combat operations to providing humanitarian assistance.

The Makin Island ARG/11th MEU, based out of Southern California, is operating in the U.S. 7th Fleet area of operations to enhance amphibious capability with regional partners and to serve as a ready-response force for any type of emerging crisis. The other ships in the ARG are the amphibious assault ship USS Makin Island (LHD 8) and the amphibious transport dock ship USS Somerset (LPD 25).