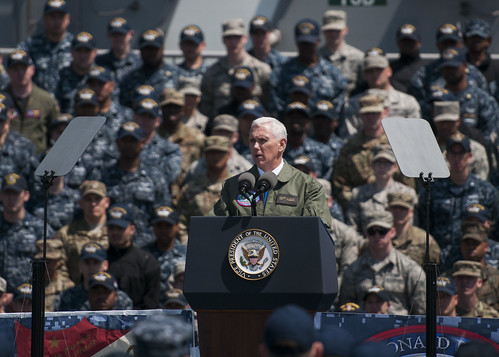 The vice president and his wife, Karen Pence, toured the ship and spoke to U.S. and Japanese service members, highlighting the administration's commitment to rebuilding the U.S. military and to its alliances in the region.

“What a cross section of capability we have here today,” said USS Ronald Commanding Officer Capt. Buzz Donnelly. “Starting with our host nation representatives from Japan Maritime Self Defense Force and looking across this group of joint warfighters that we have out in front of us. Everybody from Airman, Guardsman, Soldiers, Marines and Sailors; this is a fantastic day.”

“It is my high honor and distinct privilege to join you here today on America’s Flagship, the USS Ronald Reagan,” said Pence. “Every day all of you prove, it can be done.”

Pence expressed why he felt the partnership between U.S. forces and their Japanese counterparts is vital to keeping peace in the region.

“The United States-Japan alliance is the cornerstone of peace, prosperity and freedom in the Asia-Pacific,” said Pence. “The United States stands unwavering in our alliance and unyielding in our resolve to defend all that we have built together over these generations.”

While aboard, Pence had coffee with junior military members, and interacted with the crew on the flight deck.

“It was an honor to meet and shake the vice president’s hand,” said Cryptologic Technician (Maintenance) Seaman Emmanuel Gutierrez. “He came and got his message to the service members effectively. That message allows us to stay prepared for what could happen in the future.”

His wife, Second Lady of the United States Karen Pence, held an event with spouses of the service members to gain a better understanding of military families and the challenges they face supporting service members.

Mrs. Pence said it was an honor to be aboard Ronald Reagan and to speak with the support system of the active duty members. The information she learned during the event would be taken back to the White House to help support the First Lady of the United States’ program, “Joining Forces.”

The Joining Forces program works hand-in-hand with the public and private sectors to ensure service members, veterans and their families have the tools they need to succeed throughout their lives. 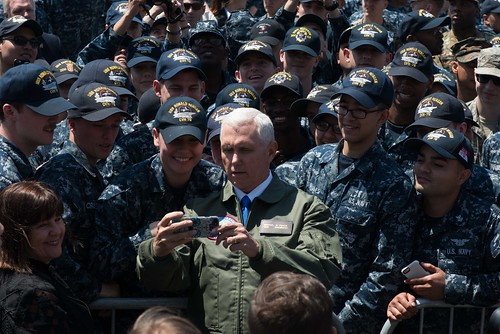