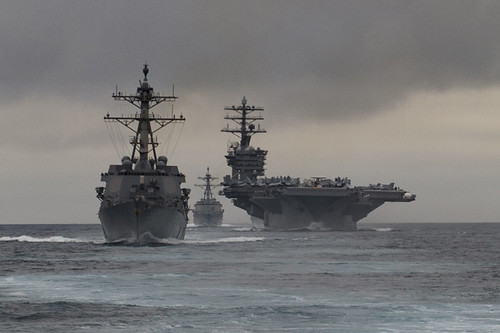 In this file photo, ships of the Nimitz Carrier Strike Group steam together during training in March. (U.S. Navy/MC3 Craig Z. Rodarte)

Nimitz, the flagship of the Carrier Strike Group (CSG) 11, Kidd and Shoup will make a brief stop at Naval Air Station North Island to meet up with the other ships and units of CSG 11.

Strike Group units have spent most of the past seven months underway preparing for deployment. Nimitz participated in a series of pre-deployment inspections and training evolutions, including Board of Inspection and Survey and a Composite Training Unit Exercise that certified them ready for deployment.

“I am so incredibly proud of the entire Nimitz team and the terrific coordination and support across the entire strike group, especially in such a condensed training cycle. The crew stepped up to the plate, and I’m confident we’re ready to meet whatever challenges lie ahead on our upcoming deployment,” said Capt. Kevin Lenox, Nimitz commanding officer.

The Nimitz Strike Group last deployed in 2013. Since then, Nimitz hosted the first aircraft carrier landings of the F-35C Joint Strike Fighter aircraft in 2014 and completed a 20-month extended planned incremental availability at Puget Sound Naval Shipyard in Bremerton, which completed in October 2016.

Nimitz Strike Group is part of U.S. 3rd Fleet, which leads naval forces in the Pacific and provides the realistic, relevant training necessary for an effective global Navy. U.S. 3rd Fleet constantly coordinates with U.S. 7th Fleet to plan and execute missions based on their complementary strengths to promote ongoing peace, security, and stability throughout the entire Pacific theater of operations.