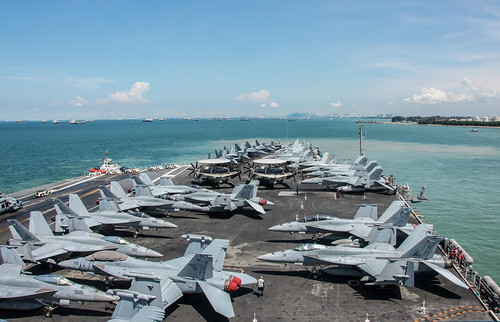 “Ronald Reagan Strike Group is thankful for the opportunity to visit the beautiful country of Singapore,” said Rear Adm. Charles F. Williams, commander, Task Force 70 and Carrier Strike Group 5. “Our Sailors look forward to experiencing the local culture and building relationships with the people of the Republic of Singapore. I’m thrilled to bring Carrier Strike Group 5 and Task Force 70 to Singapore so they can experience the same hospitality and beautiful area as I did during my tour here as Commander, Logistics Group Western Pacific and Task Force 73.”

The U.S. Navy routinely operates in the South China Sea and surrounding areas to maintain interoperability and presence in the area.

While in port, Sailors from the various ships will have the opportunity to participate in multiple community service events where Sailors will help out at local schools, churches, food banks and soup kitchens in the area. These events continue to build the relationship between the U.S. and the people of the Republic of Singapore.