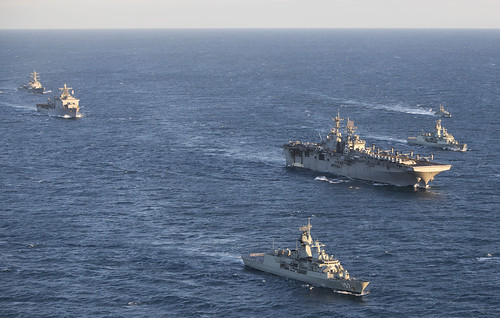 The biennial exercise unites 33,000 U.S. and Australian personnel to build on partnerships, interoperability and the ability to respond to contingencies in the region.

The Talisman Saber 17 Expeditionary Strike Group, consisting of a combined, amphibious force of 11 Australian, New Zealand, and U.S. amphibious ships and escorts, will conduct training operations across a wide spectrum of warfare areas to increase proficiency operating in a multi-threat environment. Integrating capabilities of accompanying destroyers and frigates, the ESG will fight its way into the littorals to land a combined Marine Air Ground Task Force and execute missions ashore.

“The increased complexity of this exercise will test our capabilities to integrate surface forces and further refine concepts of the ‘Up-Gunned ESG,’” said Rear Adm. Marc Dalton, commander, Expeditionary Strike Group 7. “Australian and New Zealand forces are key enablers of this concept in Talisman Saber 2017, and we are looking forward to building a strong team with them. Exercises like this ready our forces to seamlessly combine our efforts if needed to uphold the tenets of the U.S.-Australia alliance.”

The BHR ESG consists of a traditional three-ship Amphibious Ready Group of Sasebo-based amphibious ships teamed with the forward-deployed 31st Marine Expeditionary Unit. An extensive list of Australian frigates and guided-missile destroyer USS Sterett (DDG 104) provides increased capabilities to allow the combined ESG to have the capability to defend, maneuver, or neutralize against blue-water adversarial threats.

Flagship Bonhomme Richard will operate side-by-side with Australian Flagship and amphibious assault ship HMAS Canberra (L02). A Royal Australian Navy staff is embarked aboard Bonhomme Richard to perform duties as Sea Combat Commander to manage the maneuvers and coordinate the subsurface and surface defense of the ESG. Adelaide-class guided-missile frigate HMAS Darwin (FFG 04) will be in charge of the air defense of the ESG.

“Working side-by-side with our American counterparts aboard USS Bonhomme Richard is visible proof of the depth of this alliance,” said Capt. Guy Holthouse, ESG Sea Combat Commander. “Coordinating the movement and defense of the ESG within a complex maritime environment increases our combined proficiencies so that we’re able to get our forces where needed in any type of situation.”

While the exercise aims to increase complexity in the blue-water domain, the ESG will conduct its primary mission of landing forces ashore.

“We look forward to joining with Australia and New Zealand ships as we operate together to ensure the successful delivery of Marines ashore,” said Capt. George Doyon, commander, Amphibious Squadron (PHIBRON) 11. “Our unity as a Blue-Green team has developed in the transit to Australia, and we expect to build long-lasting ties with all participants of Talisman Saber 2017 through the operations ahead.”

Once launched from ESG ships, Marines of the 31st MEU will train as a crisis response force.

“The 31st Marine Expeditionary Unit, with Expeditionary Strike Group 7, has the capability to respond to crises throughout the Indo-Asia-Pacific region at a moment's notice,” said Col. Tye Wallace, commanding officer, 31st MEU. “The cohesion between our blue/green team is essential to mission success, and we look forward to further developing our capabilities with all of our partners in Exercise Talisman Saber 17.”

Talisman Saber is a biennial, U.S.-Australia, bilateral military exercise that combines a field training exercise and command post exercise to strengthen interoperability and working relationships. Learn more about the exercise on the Talisman Saber website, follow coverage on the exercise's DVIDS feature page, and connect on Facebook and Twitter.