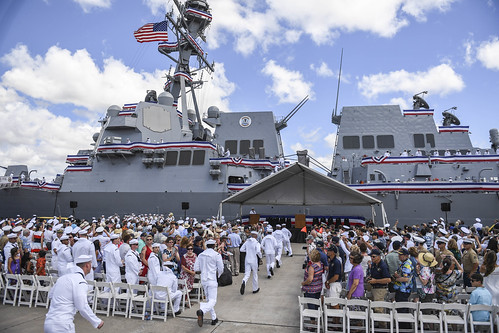 PEARL HARBOR - The Navy’s newest Arleigh Burke-class guided-missile destroyer, USS John Finn (DDG 113), was brought to life and into the fleet July 15 at Hawaii’s Pearl Harbor – a fitting commissioning venue, as the namesake’s Dec. 7, 1941 heroic actions 30 miles away at Kaneohe Bay - are the stuff of Navy legend.

Chief Aviation Ordnanceman John Finn, was World War II’s first Medal of Honor recipient who Adm. Chester Nimitz said displayed, “magnificent courage in the face of certain death” during the attack on Pearl Harbor and other Oahu military targets in 1941. Finn manned a .50-caliber machine gun while under heavy enemy machine gun fire. Although wounded, he continued to fight until ordered to vacate his post to seek medical attention. Following first aid treatment, he returned to action and led the charge to rearm aircraft returning from missions.

John Finn is the 63rd Arleigh Burke-class destroyer and was delivered to the Navy from shipbuilder Huntington Ingalls Industries on the 75th anniversary of the attacks on Pearl Harbor, Dec. 7, 2016.

"I can’t think of a more fitting place to commission this ship than right here at Pearl Harbor, where we can honor the legacy of John Finn and all Americans from the ‘Greatest Generation’ and reflect on the blessings and costs of liberty," remarked Adm. Harry Harris, Jr., commander, U.S. Pacific Command. "Thankfully, America has always been blessed to have strong women and men who find the will, and summon the courage, to endure against overwhelming odds, patriots like John Finn, who answered the call to defend our nation in her darkest hour."

Recognizing the ship’s motto to “stand fast and fight,” Harris praised the ship’s firepower and capabilities as a testament to its namesake’s readiness in battle and determination in the face of danger. The Navy’s newest ship and her crew is ready to deliver – just like Chief Finn did as he manned a machine gun while wounded and under intense enemy fire.

"John Finn brings both the saber and the shield into the fight," said Harris. "Truly, the advanced combat systems, coupled with the innovative spirit and the killer instinct of her amazing crew, are powerful reminders of our readiness to fight tonight. This warship is the embodiment of America’s resolve to protect our homeland and defend our allies."

Harris pointed out that the Aegis-capable destroyers like John Finn expand America’s projection of power and leadership in the Pacific.

“We believe in peace through strength – smart power backed by hard power,” Harris said. “And this ship, hard power personified, sends a clear signal to our allies, to our friends and to our adversaries – we will remain laser focused on the Indo-Asia-Pacific because what happens here matters to the United States.”

Approximately 2,000 guests, including more than 50 friends and relatives of John Finn’s family, attended the commissioning ceremony.

The ship was officially placed in commission by Adm. Harris. Its commanding officer, Cmdr. Micheal Wagner, a native of Minnesota, leads the crew of 300 officers and enlisted personnel and praised his crew as worthy of the standard set forth by the ship’s namesake.

“I’m truly honored and humbled to be standing here today, not only because I’m in command of the Navy’s newest destroyer, but because I’ve been given the opportunity to lead some of the finest Sailors I’ve ever met,” said Wagner. “The men and women manning this ship today are some of the finest service members society has to offer today. They come from all over the United States. Some even come from different countries. But make no mistake, they are all willing and enthusiastic about completing the mission. These are men and women of action, ready to go into action if required, just like John Finn exhibited.”

The ship's sponsor, Mrs. Laura Stavridis, the wife of retired Adm. James Stavridis, gave the order to, "man our ship and bring her to life!"

The crowd then witnessed this time-honored tradition, as members of the crew ran aboard the ship and manned the rails, as the ship’s systems came online – radars and weapon systems began to spin, the chaff launcher popped, and alarms sounded - all symbolizing the ship “coming to life.”