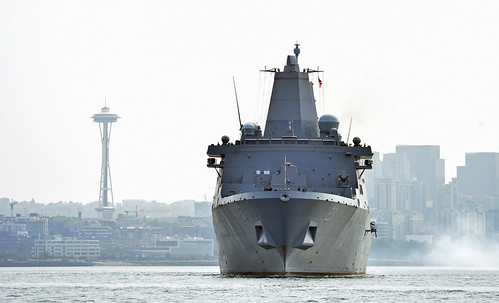 “I always look forward to seeing Sailors out on the town this time of year. We are extremely proud of the work they do. As someone who served, I know the sacrifice they make,” said John Ceallaigh, Seattle resident, originally from Kilkenny, Ireland. “I served in my country, so I feel a bond with the service members, and I’m grateful for the opportunity to show them how much we love them.”

Operations Specialist 2nd Class Raul Garza, a native of San Antonio and assigned to Michael Murphy, said everyone he encountered was very friendly, and he was excited to participate in this year’s Seafair.

“I’ve never been a part of this. I’m from Texas, and there’s nothing compared to Seattle Seafair,“ said Garza. “We’re here to show a naval presence and show that we care for the community. It’s a way to show gratitude, and show the respect that they deserve. It’s our way to say thanks.”

“We need partners, and we know Department of Defense assets are some of the best partners,” said Barb Graff, director of emergency management, Seattle Police Department. “The working relationships we have with the Coast Guard, Army, Marine Corps and the Navy is invaluable to us. If we know each other well beforehand, we do a lot better when we really need each other.”

Thousands gathered at Genesee Park and Lake Washington over the weekend with blankets, binoculars and cameras to check out the Boeing Air Show and Albert Lee Appliance Cup. With boat racing on the water, aerobatic performers in the sky, live music and delicious food on land, the Boeing Air show, featuring the U.S. Navy’s premiere flight demonstration team, the Blue Angels, rocked the Seattle area with thunderous jet engines, high speed stunts, and precise, split-second maneuvers that serve as example of the dedication and discipline associated with military service.

The Emerald City has hosted Seafair Fleet Week on its waterfront since 1950, celebrating the courageous men and women who serve our country.