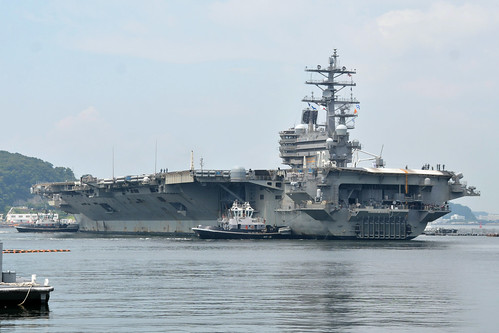 “The crew of Ronald Reagan, as well as the carrier strike group, had the opportunity to accomplish a lot this patrol,” said Capt. Buzz Donnelly, Ronald Reagan’s commanding officer. “Any opportunity we have to exercise with our allies enhances our interoperability and makes us more effective overall in maintaining the security and stability in this region.”

Ronald Reagan departed Yokosuka, May 16, to kick off the 2017 Indo-Asia-Pacific patrol. The ship’s major exercise during the summer patrol was Talisman Saber 2017, which took place in waters off the coast of Australia. Talisman Saber included more than 33,000 U.S. and Australian personnel and featured 21 ships, including the Ronald Reagan Carrier Strike Group, the Bonhomme Richard Expeditionary Strike Group, and more than 200 joint aircraft.

“Talisman Saber was an excellent opportunity for Sailors from both navies to train together and enhance our collective maritime capabilities,” said Donnelly. “Our ability to integrate seamlessly with our Australian Defence Force partners is integral to our combined efforts to support peace and stability in the region.”

During the patrol, Ronald Reagan promoted 259 Sailors from the advancement exam and another 40 through the Meritorious Advancement Program.

The ship also honored the late Julius “Harry” Frey, a Battle of Coral Sea and USS Lexington survivor, by spreading his ashes in the waters where Lexington sank during WWII. More than 60 midshipmen embarked on Ronald Reagan during the summer patrol. The midshipmen where aboard in two groups, one for 30 days and another for two weeks, as part of their “summer cruise,” designed to give them the experience of living aboard a ship as an enlisted Sailor or officer before they commission as an Ensign in the U.S. Navy or Marine Corps.

Lt. Eric Hinz, a former midshipman, who is embarked on Ronald Reagan as a pilot for Strike Fighter Squadron (VFA) 2, explained the importance of midshipmen getting the opportunity to come aboard the ship.

“Being a midshipman on a cruise gives you that experience of peeking through the shades and seeing what the future really does have in store for you,” said Hinz. “It also gives the opportunity to pick through different leadership styles and see what they like and don’t like while trying to emulate that.”

Donnelly explained the appreciation he has for the crew’s hard work and focus to accomplish the mission while on patrol.