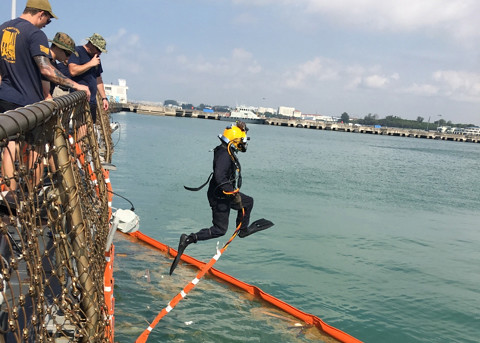 Update: Aug. 23, 8 p.m. Hawaii Standard Time - U.S. 7th Fleet announced that the remains found by the Royal Malaysian Navy are not those of a USS John S. McCain (DDG 56) Sailor. Multinational search efforts continue at sea as divers search within the ship.

SINGAPORE - The search for missing Sailors assigned to the guided-missile destroyer USS John S. McCain (DDG 56) continues in the South China Sea and within the ship itself.

Yesterday, Adm. Scott Swift, commander, Pacific Fleet, announced that the remains of a number of the 10 missing John S. McCain Sailors were discovered within the ship.

Today U.S. Navy and Marine Corps divers are continuing to search the ship, seeking to locate more of the missing Sailors. In addition, they are conducting inspections of the damage to inform repair plans. More divers will join the effort tomorrow.

At sea, search efforts are focused on an area east of the Strait of Malacca and Singapore where John S. McCain was involved in a collision with the merchant vessel Alnic MC on Aug. 21. The area centers around the point of collision, and is expanding to encompass a greater area as time goes on.

Yesterday, the Royal Malaysian Navy discovered the potential remains of a missing Sailor while searching the area. The remains were transferred to the U.S. Navy where efforts are underway to determine identification.

Both the RMN and the Republic of Singapore Navy continue to assist the U.S. Navy in the search. Today those efforts involved RSN ships Gallant and Fearless, RMN ship Leiku, and two SH-60S helicopters from USS America (LHA 6).