Swift to Fleet: Pause to focus on basics of operations 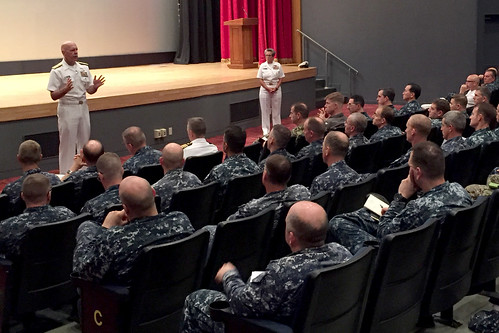 As directed by Chief of Naval Operations Adm. John Richardson in the hours following the collision of USS John S. McCain (DDG 56) with a merchant vessel near Singapore, Aug. 21, fleet commands throughout the Navy are pausing to meaningfully review and ensure safe and effective operations around the world.

In the Pacific, Swift directed each command to dedicate a full workday, with full command participation, to the operational pause no later than Aug. 28. "There can be no bystanders. Bystanders become weak links and need extra attention and leadership," Swift wrote in a message. "During this pause, focus on fundamentals -- both individual and team."

Acknowledging the depth, breadth and complexity of the operations that Pacific Fleet units have successfully completed during this past year, Swift said that recent incidents, "some of which have claimed the lives of our shipmates," occurred while conducting the most basic of operations such as anchoring, navigation, surface ship contact management and carrier qualifications.

"History has shown that continuous operations over time causes basic skills to atrophy and in some cases gives commands a false sense of their overall readiness," Swift added.

During the operational pause, Pacific commands are to develop and work through challenging scenarios that address topics such as rules of the road, standing orders, Naval Air Training and Operating Procedures Standardization (NATOPS), operating and casualty response procedures, Swift directed.

"Per my Commander's Guidance, when called upon, our mission ultimately is to decisively prevail in all contingencies from war to peace," Swift said. "We cannot complete this mission without first mastering (and continually re-mastering) the basics of our profession.

"Every day you amaze me with your leadership and the operations that you conduct under the most challenging circumstances," Swift concluded. "I am confident that you will attack this pause with the same aggressive leadership."