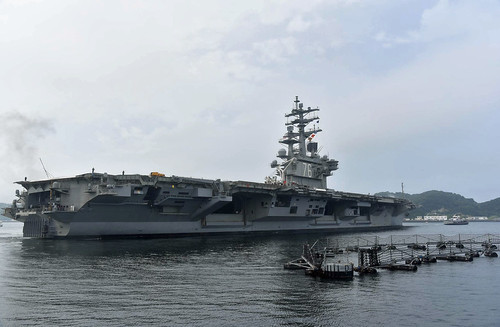 Ronald Reagan’s departure marks the beginning of a scheduled patrol following an in-port period giving the crew and ship a chance to conduct maintenance.

“About three and half weeks ago, USS Ronald Reagan returned to port after our patrol and we entered into a transition from operations to maintenance,” said Capt. Buzz Donnelly, Ronald Reagan’s commanding officer. “Although this is a very brief period for us with our ship maintenance team from Puget Sound, as well as Ship Repair Facility here in Yokosuka, our crew was able to accomplish a lot of the necessary maintenance that ensures that we will be ready to operate forward as required for our next patrol, as well as be ready when required, at any time, for operations here in 7th Fleet.”

During the patrol, Ronald Reagan, Carrier Air Wing (CVW) 5 and the crew have the opportunity to carry out a variety of missions and operate with the numerous allies within the region.

“As USS Ronald Reagan enters into our next patrol segment, we are looking forward to operating alongside and closely with our allies and friends in the region,” said Donnelly. “This is a great opportunity for us as a ship and crew, within the strike group, with our carrier air wing team to get out and operate to show our proficiency, tactics, and procedures that we can use throughout our mission areas.”

The maintenance conducted during the in-port period could prove vital during the patrol, enabling the ship, air wing and crew to be more proficient while operating at sea.

“I’m very proud of the readiness and professionalism of USS Ronald Reagan’s crew,” said Donnelly. “Our capability to execute all of our mission areas from humanitarian assistance, disaster relief and presence operations, to the potentials and ability to conduct combat operations, relies on the professionalism and capability of our crew. We are more than ready to handle any of those missions.”

Ronald Reagan, the flagship of CVW-5, provides a combat-ready force that protects and defends the collective maritime interests of its allies and partners in the Indo-Asia-Pacific region. 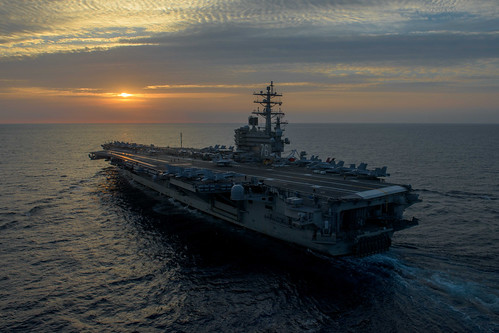 In this file photo, USS Ronald Reagan (CVN 76) operates in the Philippine Sea in May. (U.S. Navy/MC2 Nathan Burke)