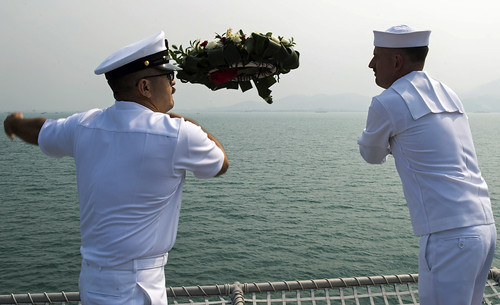 JAVA SEA - The littoral combat ship USS Coronado (LCS 4) made a goodwill visit to Jakarta, Indonesia, Sept. 14-16 to engage with civic leaders, the diplomatic community, and counterparts from the Indonesian Navy.

During the visit to Jakarta the crew hosted a shipboard reception attended by U.S. Ambassador Joseph Donovan and senior members of the Indonesian government and military.

The port visit also provided an opportunity after departing for the crew of Coronado to lay a wreath in remembrance to the fallen Sailors of the former USS Houston (CA 30) who perished in the World War II Battle of the Sunda Strait 75 years ago in waters near West Java.

“It is an honor to visit Jakarta to engage with our U.S. Ambassador, our navy counterparts and then have an opportunity to remember the sacrifices of the brave Sailors aboard USS Houston and HMAS Perth,” said Cmdr. Douglas Meagher, commanding officer of Coronado. “We thank our Indonesian partners for helping us preserve this important site.”

In the early morning of March 1, 1942, the cruisers USS Houston and HMAS Perth were sunk by the Japanese Imperial Navy in the Sunda Strait, about 60 nautical miles from Jakarta, Indonesia. During the battle, in which both ships fought to the last of their fuel and ammunition, 696 U.S. Sailors and Marines aboard Houston and 375 Australian sailors aboard Perth, including the captains of both ships, lost their lives. The wrecks remain their final resting places as war graves beneath the sea.

“The heroism exhibited by the Sailors aboard USS Houston and HMAS Perth is inspiring, and their ultimate sacrifice has not been forgotten,” said Capt. Lex Walker, commodore of Destroyer Squadron (DESRON) 7. “As the U.S. Navy continues to operate and work with partner nations in the region, the site serves as an important symbol of remembrance and lasting tribute to those who served during World War II.”

USS Coronado continues to operate in the Indo-Asia-Pacific engaging with navies across the region in exercises such as Cooperation Afloat Readiness and Training (CARAT) with nine partner nations, exercise Pacific Griffin with Singapore, Maritime Training Activity (MTA) in Malaysia and the Philippines, and Naval Engagement Activity (NEA) in Vietnam. 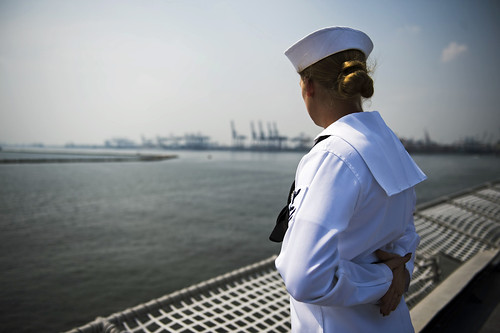