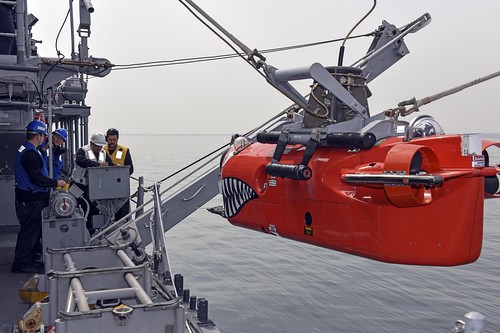 In this file photo, Sailors aboard USS Warrior (MCM 10) prepare to launch a mine-neutralization vehicle during mine countermeasures training off South Korea in March. (U.S. Navy/MC2 Jermaine M. Ralliford)

USS Chief (MCM 14) departed Busan after a short visit to join ROK Navy MCM assets and began integration procedures to ensure all participants can work together.

Over the next week, mine countermeasures ships, aircraft, and explosive ordnance personnel will conduct a series of drills meant to practice procedures and tactics to detect and neutralize sea mines in order to create safe navigation routes in given areas of operation. The evolutions are meant to provide increased mine countermeasure interoperability and readiness to respond to a contingency on the Korean peninsula.

“This exercise is an incredible opportunity for our MCM forces and our staff to conduct complex mine countermeasure operations with our much-valued allies and friends in support of the Republic of Korea Navy and other nations committed to defending the Korean peninsula,” said Capt. Jim Miller, commodore of Mine Countermeasures Squadron (MCMRON) 7, whose staff will participate in the exercise from Chinhae, Republic of Korea. “We continue to train with our MCM counterparts in the ROK Navy on a routine basis, and we look forward to further enhancing our combined capabilities through this exercise.”

"The relationship between the U.S. and ROK navies is stronger than it ever has been," said Rear Adm. Brad Cooper, commander of CNFK. "Together our navies work to strengthen the alliance and relationships we have with the UNC Sending States through engagements like the symposium that highlight cooperation and interoperability."

The UNC Sending States representatives will also observe portions of the exercise.

Participating nations contributing forces to MN MIWEX include Canada, the Philippines, the United States, and ROK.

U.S. units participating in the MN MIWEX include staff from MCMRON 7, Mine Countermeasures Helicopter Squadron 14 Detachment 2A and USS Chief.

This year marks the 64th anniversary of the U.S.-ROK Mutual Defense Treaty, which serves as the foundation of our alliance and a force for peace and stability on the Korean Peninsula and in Northeast Asia.