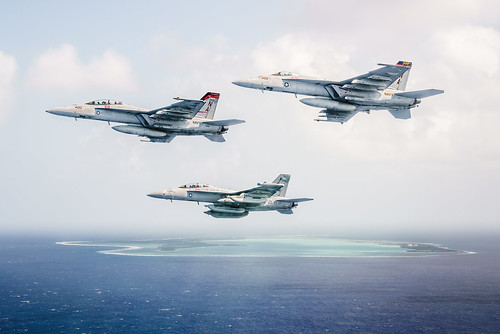 PACIFIC OCEAN - The year was 1941, and word of the Japanese air raid on Pearl Harbor was still making its way across the nation. Across the international dateline, dated as Dec. 8, but actually occurring only hours later, another attack by the Japanese was unfolding on the atoll commonly referred to as Wake Island.

Outnumbered, a garrison of about 450 Marines defended the island alongside several Sailors and a handful of Soldiers for almost a month. Although the battle ended in surrender, the forces stationed on the beach managed to inflict significant damage to the Japanese forces that sought to overtake this strategic island in the Pacific.

VMFA 312 is currently embarked on the aircraft carrier USS Theodore Roosevelt (CVN 71), and conducted flight operations over the island Oct. 26, in honor of its history and tie to Navy and Marine heritage.

“We’re still amphibious in nature,” said Fleming, reflecting on the significance of serving in an embarked squadron like those who fought on the beaches of Wake Island. “We still bring the fight to the enemy from ship to shore in every clime or place. This deployment is just one more chapter in history waiting to be written.”

Capt. John Taliferro, a Marine pilot assigned to VMFA 312 and a native of Abilene, Texas, participated in an F/A-18 formation fly over of Wake Island with pilots from embarked squadrons aboard Theodore Roosevelt.

“It’s definitely a treat that I got to go on that flight and be a part of that photo,” said Taliferro. “I was humbled to be able to do it. It’s a great deal for me.” Taliferro flew in formation over the island, witnessing first-hand the territory where the battle occurred.

“It seems like there’s absolutely nothing on the island,” said Taliferro. “It must have been difficult defending that place against a whole navy.”

Taliferro described seeing nothing but sand and some trees, envisioning the island surrounded by ships and what the Marines must have gone through during the battle.

“Even though they lost, you have to have somebody there to fight for [the island],” said Taliferro. “Be thankful for what they did back then, fighting for a tiny little piece of land that seems like it means nothing, but actually means a lot.”

Wake Island currently serves as a vital refueling station for military aircraft as well as an emergency landing area in the middle of the Pacific Ocean.

“It’s definitely still a strategic island in terms of what we do in the Pacific,” said Fleming. “I believe that’s why we still have the presence there, although minimal.”

The Battle of Wake Island serves as a reminder that the size of the enemy is not the deciding factor as to who emerges victorious. The Marines who defended Wake Island’s beaches were outnumbered, yet managed to inflict significant damage, repelling the Japanese for almost a month before eventually surrendering. Their legacy is carried on today through the Marines who continue to serve and embark upon journeys to bring the fight to the enemy.

“My prayer is that we can be as valiant as those men on Wake Island in our own way during the course of this deployment,” said Fleming. “We will get tired, we will be worn down, but as long as we can still breathe, the fight’s on!”

Theodore Roosevelt, the flagship of Carrier Strike Group (CSG) 9, is currently underway with USS Bunker Hill (CG 52), USS Halsey (DDG 97), USS Sampson (DDG 102) and USS Preble (DDG 88) for a routine deployment to the U.S. 7th Fleet area of operations. The Theodore Roosevelt Carrier Strike Group (TRCSG) deployment is an example of the U.S. Navy’s routine presence in waters around the globe, displaying commitment to stability, regional cooperation and economic prosperity for all nations. 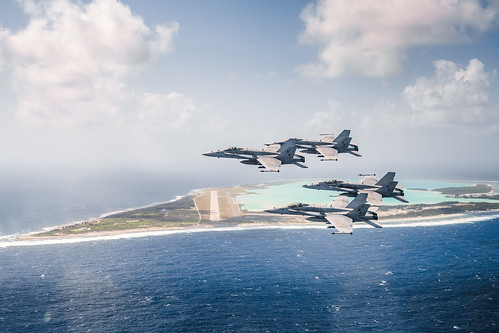