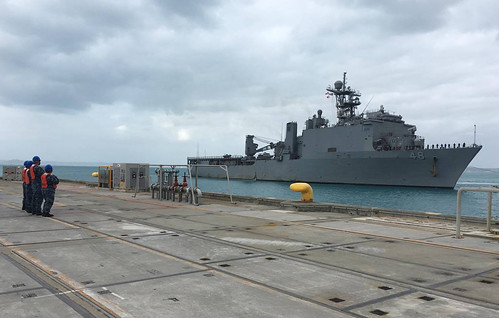 The port visit also serves as a disembarkation point for the two mariners who had been adrift in the Pacific Ocean for several months. The Ashland crew rescued Jennifer Appel, Natasha Fuiava, and Appel’s two dogs Zeus and Valentine Oct. 25 after they had been stranded at sea with a failed engine, a broken mast and were far from their intended destination of Tahiti.

After deeming their vessel unseaworthy, Ashland took the two mariners and their dogs aboard and have been sailing with them to Okinawa. Appel and Fuiava have spent the time on Ashland re-connecting with family and friends via telephone, enjoying the Ashland culinary expertise, and observing various aspects of Navy life.

“Our time on Ashland has been awesome,” said Fuiava. “Everything from the food, to the people and seeing up close in person how our Navy operates. The Sailors I've met are kind, genuine and have been beyond helpful. I will really miss the experience we've had on board.”

Appel equally felt grateful for her time on Ashland.

“The open arms that [the Ashland crew] have had for us is top notch. Thank you,” said Appel. “We're honored to be here and we are grateful for everything you have done for us.”

The Ashland crew expressed their own sense of gratitude to the mariners for providing some levity to their operations, particularly in having the dogs on board.

“Having Zeus and Valentine on board has been great. Helping the ladies out where it is needed and taking care of the dogs has been a nice change in routine,” Cryptologic Technician (Technical) 3rd Class Nichole Gorofalo. “The dogs are a reminder of home and what we Sailors look forward to going back to.”

Part of U.S. 7th Fleet's forward deployed naval forces out of Sasebo, Japan, Ashland has been on a routine deployment for the past five months as a ready-response asset for any of contingency. 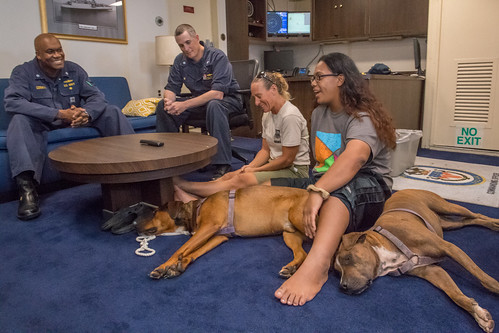