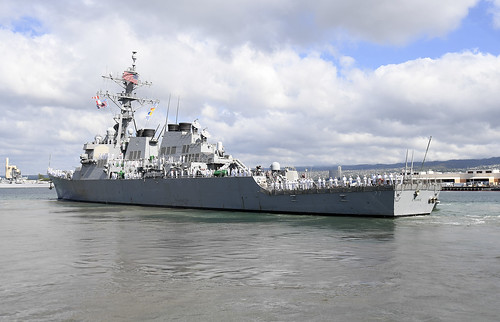 O'Kane has a crew of nearly 330 Sailors, officer and enlisted, and is a multi-mission ship designed to operate independently or with an associated strike group.

While deployed, the ship will conduct theater security cooperation and maritime presence operations with partner nations. Having steadily worked through a sustainment cycle, the ship's commanding officer is confident in his ship and crew's performance.

"The crew has worked hard over the past several months, participating in advanced level exercises and improving the material condition to be ready for our deployment," said Cmdr. Colby Sherwood, commanding officer of O'Kane. "I am proud of the resiliency of these Sailors and all they have accomplished to maintain O'Kane's readiness. We look forward to operating with our allies and partners from around the world again."

O'Kane is named after Adm. Richard O'Kane, a Medal of Honor recipient, as the aggressive commanding officer of USS Tang during World War II. USS O'Kane was last deployed to the Persian Gulf in 2014.