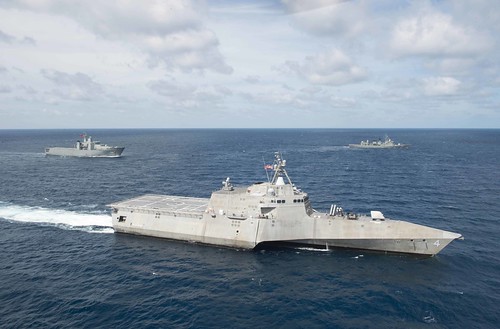 During the deployment, the ship and crew operated with navies of 16 partner nations, participated in 11 multilateral and bilateral exercises, and made 10 strategic port visits across the region.

"The rotational deployment of USS Coronado demonstrated the relevance of LCS as a platform tailor made for the dynamic and congested sea lanes, straits and archipelagos of South and Southeast Asia, providing flexible options and tactical advantages," said Rear Adm. Don Gabrielson, Commander, Task Force 73. "We made tremendous strides in a challenging, forward deployed environment and the team is already applying lessons learned to future deployments in 2018. The Navy remains committed to the rotational deployment of LCS to the Indo-Asia-Pacific and views the LCS as a pillar of future U.S. maritime presence in Southeast Asia."

Coronado achieved many operational milestones for the LCS program to include coordinated counterpiracy operations with the Philippine Navy in the Sulu Sea and inaugural port visits to Cam Ranh, Vietnam and Lamut, Malaysia where the ship and crew deepened maritime partnerships. While operating alongside the Republic of Singapore Navy during exercise Pacific Griffin near Guam, Coronado fired a Harpoon surface-to-surface missile and successfully struck a target beyond visual range. The ship also contributed to regional maritime security through routine presence operations in the South China Sea, Philippine Sea, Andaman Sea, and the Straits of Malacca and Singapore.

“USS Coronado has been an integral part of building and strengthening maritime partnerships around the region,” said Capt. Lex Walker, commodore of Destroyer Squadron (DESRON) 7. “By working side-by-side with partner nations and learning from each other, we were able to effectively operate Coronado and enable the ship to make valuable contributions to maritime stability and security in the region.”

There were also opportunities to improve scheduled and expeditionary maintenance for a deployed LCS. The ship’s maintainers reduced the average repair time while deployed from 15 to 4 days, increasing the availability and readiness of Coronado to operate across the region. Coronado also conducted expeditionary maintenance availabilities in locations outside Singapore to include Cam Ranh, Vietnam, Guam, and Lumut, Malaysia.

“I am extremely proud of the Sailors and the work we did in the region,” said Cmdr. Douglas Meagher, commanding officer of Coronado. “The experiences we’ve made with new friends and partner navies throughout the region during this deployment will remain with us for a long time.”