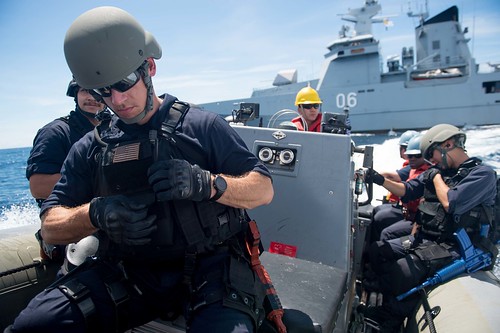 "Our relationship with the Royal Brunei Armed Forces continues to flourish and is deepened by the broad exchanges of skills, culture, and friendship that have made CARAT a comprehensive and meaningful exercise for both nations over the last 23 years," said Rear Adm. Don Gabrielson, Commander, Task Force 73. "Our longstanding ties show the commitment of the U.S. Navy, partnering with like-minded nations to promote peace, stability, security and prosperity across the region."

Key events during CARAT Brunei include subject matter expert exchanges in port security, aviation and surface warfare, diving and salvage, military medicine, law, public affairs, along with a comprehensive at sea exercise. Additionally, U.S. Marines will work alongside soldiers from the Royal Brunei Landing Force during a jungle warfare exercise and the U.S. 7th Fleet band will perform alongside their Royal Brunei Navy counterparts during community relations engagements.

As one of the original CARAT partners, the Royal Brunei Armed Forces have participated in CARAT since the exercise series began in 1995. The United States and Brunei have enjoyed diplomatic relations since 1845, when the USS Constitution dropped anchor in the Brunei Bay.

“We are honored to host our friends and partners from the U.S. Navy and Marine Corps in Brunei for this 23rd iteration of CARAT,” said Lt. Col. Isamaon Bin Zainie, chief of staff, Joint Forces Headquarters. “The training and cultural exchanges we conduct during this exercise enhance our tactical skills and build long lasting friendships between our forces.”

CARAT is just one element of the longstanding U.S.-Brunei defense partnership, which also includes annual ship visits, staff talks, and Royal Brunei Navy participation in the U.S. led Southeast Asia Cooperation and Training (SEACAT), a multilateral exercise that involves navies and coast guards from 11 regional nations. This year, portions of SEACAT were conducted at the multinational coordination center (MNCC) in Brunei.

“We are pleased to have another opportunity to operate with our friends and partners from the Royal Brunei Navy,” said Capt Matthew Jerbi, deputy commodore of Destroyer Squadron (DESRON) 7. “We have built meaningful relationships at the operator level with our Royal Brunei counterparts through CARAT that enables our navies to work effectively together and learn from each other in ways that benefit both nations.”