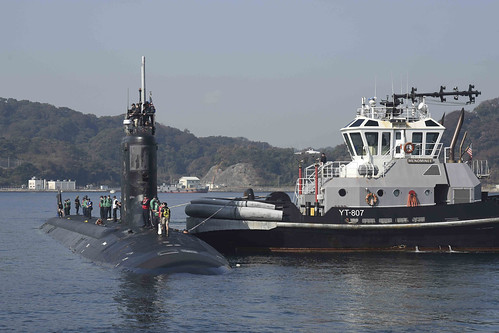 The visit strengthens the already positive alliance between the U.S. and Japan through the crew’s interaction with the Japan Maritime Self-Defense Force. It also demonstrates the U.S. Navy’s commitment to regional stability and maritime security in the U.S. 7th Fleet area of operations.

“It is great to be back in Yokosuka!” said Cmdr. Eric J. Rosek, commanding officer. “After several months at sea it is always important to be able to reach back to our loved ones. At the same time, the welcoming people of Japan make experiencing their culture a terrific opportunity. About thirty percent of the crew of Mississippi has never travelled outside of the United States. I know they will be impressed by everything Japan has to offer during our stay.”

The 145 officers and crew of Mississippi are excited to be in port after two months at sea. Japan is the first port of call for this deployment and for many crew members it will be their first time traveling outside of the U.S.

“I am excited to try new food unique to Japan,” said Culinary Specialist 3rd Class Kyle Wilber, a native of Albany, New York. “This is my second deployment and I always look forward to the exotic cuisine, markets and Japan’s culture has to offer.”

Mississippi is one of the most technically advanced and stealthiest submarines in the world and is capable of fulfilling a multitude of missions. The ship aids in the defense of America’s critical access to the world’s ocean trade routes and provides credible defense against any hostile maritime forces. Mississippi is homeported in Pearl Harbor.