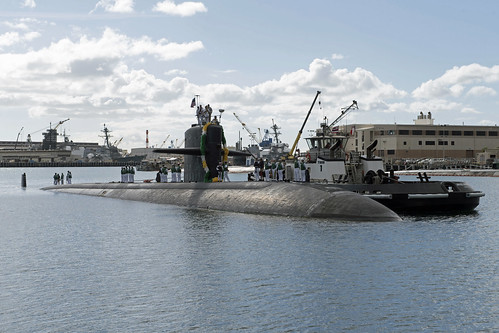 "The total commitment and level of effort this crew has demonstrated over the last 18 months both prepared for and executing this deployment is nothing less than outstanding," said Cmdr. Benjamin J. Selph, native of Prescott, Arizona and commanding officer of Olympia. "This group of young men conducted themselves as professionals of their trade and ambassadors of their country throughout the deployment and I could not ask to lead a more dedicated crew."

The deployment was a great opportunity for junior Sailors to gain vital operational experience and to hone guidance and leadership skills from the senior leadership.

"The sincere efforts by our experienced submariners instilling qualities that every Sailor needs to be successful and safe helped the junior Sailors become more knowledgeable and helpful in the execution of ship's operations," said Master Chief Electronics Technician Submarine, Navigation Roland R. Midgett, chief of the boat and native of Virginia Beach, Virginia.

During the deployment, Olympia advanced 16 enlisted Sailors to the next rank, promoted seven officers and saw 37 submariners earn the right wear the Submarine Warfare device.

"Having the opportunity to visit Japan on two separate occasions was an unforgettable experience," said Machinist's Mate (Weapons) Fireman Raul Bonilla, a native of San Diego.

The return of the Olympia to Pearl Harbor marks nearly 33 years of commissioned service since November 17, 1984.

Olympia is the second ship of the Navy to be named after Olympia, Washington. Olympia is the 29th ship of the Los Angeles-class fast-attack submarines. The submarine is 362-feet long, displaces 6,900 tons and can be armed with sophisticated Mark-48 torpedoes and Tomahawk cruise missiles.