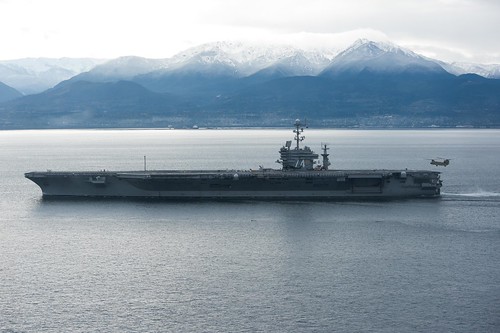 BREMERTON, Wash. - USS John C. Stennis (CVN 74) returned from a two-week underway, Nov. 16, after completing a busy schedule of events as it continues in its basic phase training.

“This underway gave the crew a chance to work on perfecting a wide range of skills,” said Capt. Greg Huffman, John C. Stennis’ commanding officer. “We didn’t do any fixed-wing flight operations, which gave us a chance to really dig-in and practice many of the basic skills essential to navigate and operate a warship safely wherever we may be called on to go.”

The ship conducted multiple general quarters drills, with teams assigned to repair lockers throughout the ship fighting simulated fires, flooding and structural damage. They also spent time making sure they could rapidly increase the ship’s condition of material readiness, closing water-tight hatches and doors to increase ship’s survivability in case of damage.

John C. Stennis also exercised its ability to respond to mass casualties in case of an aircraft or other accident which injures a large number of Sailors. This complex evolution requires participation of the whole crew working together to rescue, transport and treat their shipmates.

To be ready to protect the ship from damage from hostile forces, the crew put some of its self-defense capabilities to the test, first with live-fire maintenance and then by engaging a towed target with its close in weapons system (CIWS).

The crew also held a Veterans Day 5k run to honor the veterans who preceded them in service to the country, as well as a burial at sea to lay several Navy Veterans who had passed away to rest. Several crewmembers were baptized by the ship’s chaplains on the flight deck. John C. Stennis even took the chance to foster some friendly competition, hosting both damage control Olympics between repair lockers and a cooking competition for its supply department Sailors.

“I was given the opportunity to come aboard Stennis to learn and experience the roles and duties of a judge advocate general (JAG) on a ship as well as see what it’s like to live onboard,” said Lt. Laura DellAntonio, trial counsel, from the Regional Legal Service Office Northwest, located in Bremerton. “I’ve learned how JAG’s are utilized on a ship and it’s been very interesting to see all of the different jobs onboard and observe how everyone works together.”

John C. Stennis returned to port to prepare for future operations and its next scheduled deployment.