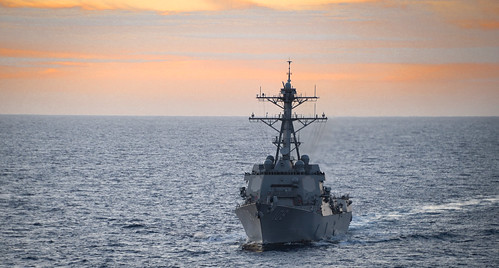 At approximately 8:20 a.m., Nov. 18, Wayne E. Meyer responded to a distress call from Motor Vessel IKENA. Wayne E. Meyer, which was conducting routine operations off the coast of San Diego, immediately made best speed to render assistance to the distressed vessel.

Wayne E. Meyer arrived on scene and deployed its rigid-hulled inflatable boat (RHIB) to recover the mariners from the sinking vessel. Once aboard the ship, the mariners were evaluated by the medical team before being transferred to U.S. Coast Guard Cutter Petrel.

"We were in close proximity to the crew members just minutes after their boat submerged, and are proud to have quickly assisted and returned these men home without injury," said Cmdr. Alex Mamikonian, executive officer of Wayne E. Meyer.

Wayne E. Meyer is based in San Diego and is part of the Carl Vinson Carrier Strike Group. The strike group most recently completed a three-week sustainment exercise off the coast of Southern California, Nov. 16, in preparation for a scheduled deployment to the Western Pacific early next year.

"You really learn what your crew is capable of when a real life situation develops. Although we continually train for all types of contingencies, it's the performance of the crew, when lives are at stake, that allow you to gage the effectiveness of our training," said Cmdr. Vince Fortson, commanding officer of Wayne E. Meyer. "I have never been prouder of my crews performance today, quickly reacting to a real life rescue mission. They performed calmly, superbly, and professionally."

Carl Vinson Carrier Strike Group is part of U.S. 3rd Fleet. Third Fleet leads naval forces in the Pacific and provides the realistic, relevant training necessary for an effective global Navy. Third Fleet constantly coordinates with U.S. 7th Fleet to plan and execute missions based on their complementary strengths to promote ongoing peace, security, and stability throughout the entire Pacific theater of operations.