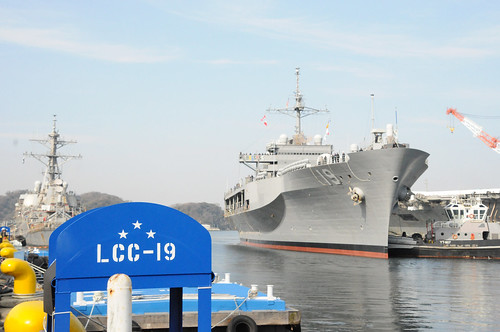 During the 19-month EDSRA, the ship underwent major structural modifications and upgrades across a multitude of systems, extending her life by approximately 20-plus years.

“Completing this dry dock period is a huge deal,” said Capt. Brett E. Crozier, Blue Ridge commanding officer. “It is an important part of a greater legacy for both the Blue Ridge and the U.S. Navy, and I would like to especially thank the crew, family members, ship’s repair force workers, and others who have had a hand in modernizing Blue Ridge.”

However, the maintenance and repair work aboard Blue Ridge is not yet complete. While moored pierside, the ship’s Sailors and civilian workers will continue to work side-by-side for further engineering and electrical plant upgrades, as well as improvements to living quarters. All improvements made will assist Blue Ridge in returning to its primary role of providing command, control, communications, computers, and intelligence (C4I) support to the U.S. 7th Fleet commander and staff.

"After about two years in the yards spent on crucial repairs and improvements, it’s the crew’s turn to get ready to get back on patrol and return to our mission once again,” Crozier said.

Sailors will now also push through an extensive training and qualifications period, including search and rescue, navigation and seamanship, engineering proficiency, and damage control efforts. The crew will complete all training evolutions before returning to a mission-ready status.

Blue Ridge commissioned Nov. 14, 1970, making it the oldest operational ship in the Navy. Several weeks ago, the crew celebrated the ship’s 47th year in service. Plans are for the 7th Fleet Flagship to stay in active service for another 20-plus years.

As command ship for U.S. Seventh Fleet, Blue Ridge has been forward deployed to the Yokosuka, Japan, region for 38 years, patrolling and fostering relationships within the Indo-Asia Pacific Region.